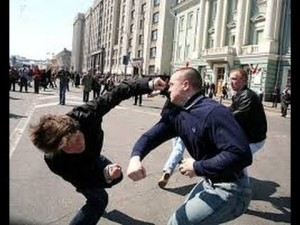 The simple answer is ‘See it coming and move.’

The not so simple answer is I just finished writing a 150 page e-book that covers this subject. It will be available next month. It’s called “Writing Violence IV: Defense” and it will be available for a whopping $2.99. I specifically go into some of why this kind of attack is so damned weird.

It’s weird because it’s both
a) the stupidest, most ineffective, amateurish, wasted movement, my grandmother hits harder attack, and
b) the one that freaks people out the most (and in freaking them out, THEY make the damned thing work)

Wait. What?
I’m not BSing you when I say that it is a stupid, clumsy and ridiculous attack — UNLESS the target does something specific. Then it works. The problem is that untrained people DO THAT SPECIFIC THING!

The power in this attack — and by that I don’t mean the force of the attack, but the psychological — is that it will make an untrained person freeze like a deer in the head lights.

Let me say that again and in a different way. The reason this kind of attack works is because untrained people STAND THERE and watch it come at them.

Any attack is designed to deliver maximum aggravation at a specific location (think GPS). This kind of wild swing, yelling, and bug eyed nonsense spooks untrained people into staying rooted to that spot. If they DO try to move, they try to back pedal. Which is unfortunately like seeing a train coming at you and trying to backpedal down the tracks. You’re still going to get hit by the damned train. Why? Because it can go forward faster down the tracks than you can go backwards down the tracks.

When I say move, I mean get off the damned tracks.
Wait until the guy gets close, then jump off the tracks. That is the fundamental strategy. Pretty much everything comes from there. If you can’t get off the tracks, you’re going to get hit. So pay attention to overcoming the natural reaction of deer in the headlights.

Stand up and measure the distance between your eyebrows and the floor. Now lay that same distance down on the floor in front of you. That is your ‘attack range.’

That’s to say it’s the distance you can attack someone (barehanded) WITHOUT taking an additional step. Now I tell you about that because that is absolute distance someone can attack you at. And that’s someone who knows what he’s doing. From that distance and with his feet in just the right way he can land a kick. He moves and WHAM!!! Outside of that range the guy HAS to take extra steps to reach you.

In reality, most people can’t attack from that far out. So cut that distance in half and you get most people’s attack range. If they aren’t that close, they’re going to HAVE to walk over to being that close. You’re NOT fighting Reed Richards from the Fantastic Four who can stretch his arm and punch you across the street.

The other thing you need to know is a professional/experienced fighter will establish attack range BEFORE he launches his attack. An amateur will try to establish range AS he is attacking.
Putting that in other terms. An experienced attacker will slide into attack range and then WHAM!! He’ll nail you. This guy is actually MORE dangerous than the other guy because he doesn’t look scary until it’s too late.

An amateur will start his attack and charge into range to hit you. He’s relying on you freezing because he’s got this whole booga-booga-boo act going on.

So from a fighting perspective. You’re not looking at the guy’s fist. You’re looking at his feet. IS HE IN PUNCHING RANGE? If not, he can’t punch you. If yes, then you’d DAMNED well better be on the look out for him swinging on you.

Being able to recognize attack range gives you ALL kinds of time to spot when someone is about to attack. OR if he’s doing the booga-booga act to realize you have time to break the freeze because you haven’t been hit yet.

THAT’S the second thing of see it coming.
Start by keeping him outside of his attack range. (From his eyebrows to the floor.) This is where most inexperienced folks screw up (at least in the US) they’re so busy huffing, puffing and wagging their dicks around that either they let the other guy develop punching range or they’re the ding-a-ling who steps up INTO the other guy’s punching range to tell him to get out of their face. Then they’re caught with their dicks flapping in the wind when ‘unexpectedly’ get punched.

EXCUSE ME?! How can you be surprised that you got punched when YOU got up in his face? DUH!!!! Where it goes into sheer stupidity is “I didn’t see it coming.” Well if you weren’t so busy trying to scare him with how big your dick is, might have noticed you’d walked INTO his attack range.

Kinda hard to react in time when you’re busy doing the dumb.
That’s why I say “see it coming and move” are your two fundamentals. If you can’t accomplish those two fundamental requirements, then nothing else is going to do you any good.
Or as my favorite Mountain Man Rabbit Stew recipe reads. Step one: Catch a rabbit.

If you don’t have that first step, everything else that follows is meaningless.