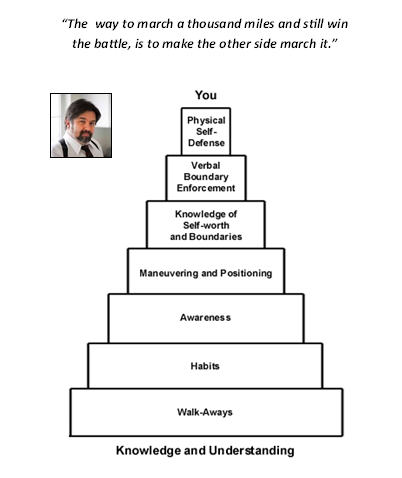 Physical self-defense is the last ditch effort. If it gets to this point through all the other levels, it has been forced here. You are justified to do what it takes to stop him. While some people choose not to participate in use of force in order to defend themselves, others have no such qualms. Either choice carries responsibilities. Physical self-defenseis not about fighting, it’s about not being hurt by violence. Nor is it about being fearless. It is not necessarily studying the martial arts nor buying a gun, it is doing what you have to do to keep from being hurt, raped, robbed or killed. And then dealing with the authorities and psychological cost afterwards

Verbal Boundary Enforcement is communication. It is letting a would-be assailant know that you are aware of what is occurring and that you are committed to doing whatever it takes to protect yourself.

This is not threatening nor blustering; it is a clear cut message for him to "get off mah land." And that failure to do so will have unpleasant results. This is being assertive, not aggressive. You are doing what it takes to get him out of your boundaries, not chasing him down the street. Before you vocalize: Know how far you are willing to go.

Knowledge of Self-worth and Boundaries is essential to not becoming the victim of crime and violence. Even if you have decided that you are not willing to use physical violence to defend yourself, until this point the pyramid still works. It is however, important to realize that no matter what your decision about using physical self-defense to protect yourself, that you have come to a crossroads. A crossroads that requires mental preparation to navigate.

Aside from the obvious implications, when we use the terms knowledge of self-worth and boundaries, we also are including knowing how you think, the difference between assertiveness and aggressiveness and how you are coming across.

As for self-worth, it is a commitment to yourself. It is the knowledge that neither you nor your loved ones can afford you to be victimized. It is also knowing when you are justified to tell someone to "back off" and just as importantly when to stop! Which brings us into the boundaries issue.

When you are dealing with a potential assailant, you must remember you are being confronted by a totally self-absorbed person, who is not afraid to use violence to get his way. The last thing you want to do is let anger and fear to take over or to invade his space! Any of which will provoke him. If you do he is more likely to become violent. If you don’t know where to stop, you can provoke a situation that could have ended without violence.

In the same vein, you cannot hide behind avowed pacifism while still being verbally violent.

Maneuvering and Positioning are knowing where you don’t want to be. There are positions from where an assailant can (and probably will) successfully attack you. If he (and his cohorts) can achieve these positions, your chances of effectively defending yourself are slim to none. And Slim left town. The violence will be swift, intense and aimed at your weak spots. Unless you are willing to commit extreme physical violence in self-defense do not allow this situation to develop. Positioning is a strategy game. It is the criminal trying to put you where he wants you and you moving so he can't.

The thing is this game is very real and very dangerous, it is however, not apparent on the surface. We have a term we use that describes this condition: "shadow dance." And that means something is going on that everybody knows is occurring, but nobody talks about it openly. Foreign embassies are prime examples of shadow dancing. On the surface, they are for diplomatic relations, commerce and to assist nationals traveling between countries. However, integral to their very foundation is spying, both the committing and preventing the host country from doing the same. So while everyone from the ambassador himself to the lowest secretary is either doing it, or has been trained to prevent it, nobody talks about it or admits it is happening. What's happening isn't innocent, but it is hidden behind a facade.

Criminals engage in shadowdancing all the time. They are pretending to be doing something else. If they blatantly display their intentions too early their "prey" will either elude them or have time to successfully defend themselves. Therefore the criminal most often tries to hide his intent until it is too late. This need for subterfuge can be turned against them however.

As they quietly try to jockey you into position, you just as quietly slip away. What are they going to say, "Hold still so I can rob you?" Criminals most often rely on their victims not knowing the "game is afoot" long before a weapon is displayed (by then it is too late). But by you knowing what the criminal needs and not letting him develop it you nonviolently protect yourself from crime and violence.

Awareness is born of a blend of habits and knowledge. One part would be knowing where a mugger would lurk in a parking garage in order not to be seen by security personnel or potential victims. Having the habit of looking around and seeing if anyone is loitering in that spot when you enter the parking structure is the other. If you see known danger signs, turn around and go back -- don’t walk into the lion’s jaws.

We have a saying "Awareness without knowledge is paranoia." The blending of knowledge of what is really involved in a crime, what certain things mean and the forewarning that your good habits will give you instill within you a calm confidence. It's like driving a car, if you pay attention and remember to do what you know about driving, you can easily avoid most accidents and problems. It is however, when you forget to do those things or get involved in other things that your car gets wrecked and you get hurt.

Habits are those repetitive actions taken daily to ensure your safety. They are simple acts you train yourself to do that significantly decrease the chances of a criminal choosing you, or your property, as his target.

They can range from remembering to enable your "walk-away" security measures (i.e., locking doors, windows and closing your drapes when you leave), never leaving your car running and unattended, to not leaving valuables in plain sight on your car seat, to looking around when you enter a fringe area or before you reach your car. Such habits are not difficult to ingrain and, within a week or two, become automatic.

The reason they are effective is that they either remove items of value from sight, deny easy access or complicate things for the criminal. Moreover, they give you early warning that something is wrong. This is essential for foiling the criminal's attempt to develop his plans unnoticed and without opposition.

Walk-Aways are things that you do once and just walk away from. These are security measures that, once in place, serve as both deterrents and safeguards. Generally, these are things you can do around your home or business to discourage and foil break-ins.

When done correctly, walk-aways are like an iceberg -- what is apparent above the surface serves to warn away most would-be burglars -- but the bulk is under the surface. And that hidden bulk is what will sink the burglar's ship if he doesn’t take the hint and steer clear. Criminals do not like the unexpected. Walk-aways are unexpected snags Often this unexpected resistance is enough to scare the criminal away. However, for the more determined criminal it is a hindrance that will serve to slow him down and increase the chance of him getting caught.

Walk-aways not only to keep your home safe from burglary when you are not there, but serve as an early warning system against break-in when you are home. This becomes a critical element if you are in a stalker situation as home security walk-aways are your first line of defense.

Start from the bottom and work your way up. Each level takes you higher and keeps you safer. It does this by creating a consistent network that works simultaneously on several fronts. What will stop a burglar will also foil a stalker or a break-in rapist. What works to stop a mugger will also foil a serial rapist or carjacker. This consistency closes the gaps left by a fragmented approach -- gaps that crime and violence come through to enter your life.

While it might seem like a great deal of work, this system is, in fact, simple and easy. Once it is in place, it requires no more than a minute from your daily routine to ensure your personal safety. And we do mean a minute. And not all at once either. Just five seconds segments, that collectively add up to no more than a minute a day. In addition, while the pyramid works better when all levels are involved, just using the first four levels will serve to keep you safe from a majority of crime.

The foundation that the pyramid stands upon is knowledge and understanding. This means knowing how the criminal and violent people think and what they need to succeed. These aren't good people gone bad, they're bad people gone worse. You also need to understand what provokes violence, what violence really is and that it comes in many different levels. Without this fundamental understanding, there can be no cohesiveness in what you do to protect yourself (and your property).

There is no reason for YOU to live in fear of crime and violence. There is however reason to take reasonable precautions. And in doing so, you will have deterred most criminals from choosing you as their victim.

The reason is simple, there are thousands of people around who are easier and safer targets. The harder you make it for the criminal to victimize you, the more likely he is to go ply his trade elsewhere. You won't have stopped the criminal from being a criminal, but you will have stopped him from choosing you as a victim.

With this in mind, personal safety can be viewed as a pyramid. Each level not only increases your safety, but builds upon the level under it to create a cohesive and consistent whole. This way you have a solid structure, rather than a patchwork of "do this for this situation and that for another" answers for personal safety. Such a fragmented approach requires excessive work, inconvenience and, often, drastically altering your lifestyle. What's worse is it still leaves opportunities and openings for you to be attacked. This pyramid is designed to work with your lifestyle, not change it.

Growing up on the gang-infested streets of Los Angeles not only gave Marc MacYoung his street name “Animal,” but also extensive firsthand experience about what does and does not work for self-defense. What he teaches is based on experience and has proven reliability for surviving violence. If it didn’t work, he wouldn’t be alive to talk about it.

He is considered by many to be one of the most analytical thinkers on the subject of  surviving violence and personal safety today.  He has taught police, military, martial artists and civilians around the world. His message is always the same: Hand-to-hand combat is a last ditch effort when other, more effective, preventive measures have failed.

There is no reason to live in fear of crime and violence. There is however reason to take reasonable precautions. And in doing so, you will have deterred most criminals from choosing you as their victim.