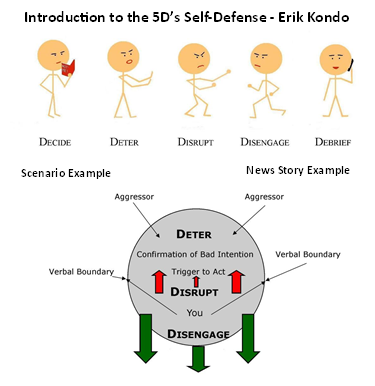 Introduction to the 5D's

By the time the average American reaches adulthood he or she has been exposed to a wide variety of tips and advice on self-defense.  This information has come from a range of sources such as: parents, friends, police, news media, books, magazine articles, martial artists, self-defense gurus, and more.  Unfortunately, most of the self-defense advice has been reduced to mere sound bites of self-defense that are subject to misunderstanding and misinterpretation. What is missing is a method to interpret and digest the information and a plan of action to apply the sound bites to actual situations.

A side effect of this advice is the belief that martial arts or self-defense instruction will provide you with the right technique(s) to handle an attacker.  The thinking is that self-defense involves simply the application of the correct technique in response to a particular attack.

But while it is comforting to believe that there is a “Heimlich Maneuver” for stopping an attacker or a method of “CPR” for surviving an assault, it is not true. The circumstances and persons involved in any self-defense situation are so widely diverse that there is no one size fits all technique of self-defense. Therefore, the most successful method of self-defense is to minimize physical actions and maximize the mental and emotional aspects of preparation and prevention.

The 5D’s: DECIDE DETER DISRUPT DISENGAGE DEBRIEF define the five stages of self-defense.  They provide a strategic blueprint for understanding and conveying all self-defense tips, advice, and concepts along with the emotional modes that accompany them.

Summary of the 5D's

The 5D's of Self-Defense provide a framework for understanding and conveying all self-defense tips, advice, and concepts along with the emotional states that accompany them. What you do in response to an assault is driven in part by your emotional state, not just by what you know.

Plan and Prepare for Aggression

DECIDE is the preparation step. It is the foundation of self-defense. It is made up of planning, education, acceptance, training,conditioning, avoidance, and strategy.

DETER is the prevention step It begins when you leave an area of safety and continues until the moment of the actions of DISRUPT.

Shock and Surprise your Aggressor

DISRUPT is the violent and most physical step of self-defense. Its sole purpose is to create the opportunity to escape.

Evade and Escape from your Aggressor

DISENGAGE is the immediate goal of self-defense. It involves your complete commitment to get away from your attacker.

Discuss and Heal to Reduce the After Effects

DEBRIEF is the long term goal of self-defense. It is the aftereffects of an assault.

The 5D's of Self-Defense divides the universe of self-defense into three stages of Preventon (before), Intervention (during), and Mitigaton (after) where:

DECIDE is the preparation step.  It is the foundation of self-defense. It is made up of planning, education, acceptance, training, conditioning, avoidance, and strategy.

"Therefore, I say: Know your enemy and know yourself; in a  hundred battles, you will never be defeated." - Sun Tzu, The Art of War

DETER  is the prevention step.  It begins when you leave an area of safety and continues until the moment of the action of DISRUPT. It involves repelling all potential aggressors and building your readiness for a physical assault. It is characterized by awareness, intuition, attitude and appearance, assertiveness, body language, boundary setting, and deception.

DISRUPT is the violent and most physical step of self-defense. Its sole purpose is to create the opportunity to escape.  It begins with the Trigger to Act and involves the concept of attacking the attacker to surprise, shock, or cause injury to your attacker.

Many times DETER and DISRUPT overlap. This next video is more of a Disruption of current unwanted behavior since it came AFTER the Trigger to Act. But the actions also served as a Deterrent for future unwanted behavior.
Store Clerk vs. Robber

A DISRUPT action comes after the Confirmation of Bad Intention AND the Trigger to Act. DETER on the other hand comes before these two signals.

In simple terms, you use deterrance before you have determined you must to take certain counter-measures. You use disruption after you have made the determination.

DISENGAGE is the immediate goal of self-defense. It involves your complete commitment to get away from your attacker. Alternatively, it is sum of your actions that has caused your aggressor to discontinue attacking by his own decision. It is characterized by your fleeing to safety or the aggressor’s unwillingness or inability to continue his actions.

The following videos show examples of DISRUPT and DISENGAGE

DEBRIEF is the long-term goal of self-defense.  It is the after- effects of an assault.  The ultimate purpose of self-defense is to minimize the long term consequences and the aftermath of aggression. This concept includes creating peace of mind.

Debrief and discuss the consequences of aggression.

Example Scenario
You are waiting for a friend outside a local convenience store.  Suddenly you notice large man walking rapidly toward you. He is looking directly at you and his clothes are in disarray. You start to feel panic, but you force yourself to remain calm. Unfamiliar with the effects of adrenaline and uncertain what to do, you do nothing. The man steps right up to you. Before you have time to react, he grabs you by the throat, squeezes and demands your wallet. Unable to breathe or speak, you are barely able to comply. After pocketing your wallet the man departs. But not before he gives a final vicious squeeze that permanently damages your vocal cords.

In this situation, your mindset was conscious, your body state was adrenalized, and your emotional mode was calm/controlled.  Since you had never decided how you would handle this type of situation, you were completely unprepared.  As a result, you did not act to protect yourself and received a serious injury.

The Application of the 5D’s

Same situation as previously described, but as the man approaches you look directly at him and state clearly, "What do you want?”  Responding to your voice he looks at you with a sinister smile. Immediately your intuition senses danger. You raise your hands forward and forcefully state, “Back off!” (DETER).

The man ignores you and you escalate your verbal intensity and yell, “BACK OFF !!!”.  The man continues to rapidly move toward you (you have now received Confirmation of Bad Intention).

Your mind becomes more instinctual (mindset is now in transition) and your body is filled with a surge of fear and energy as it is charged with adrenaline invoked by your yelling (body is in adrenalized state).

You are filled with an overwhelming urge to protect yourself (emotions in protective mode).  As the man reaches out (you have now received the Trigger to Act which transitions your mind to subconscious mindset, your body into fight state, and your emotions into violence mode) to grab you, your hand instantly shoots forward into his face, two fingers strike his eye.

Filled with the motivation to stop him from harming you, you strike him repeatedly with the heel of your palm in the bridge of his nose while continuing to yell (DISRUPT). The man, filled with pain and unable to see through teary eyes, hesitates (you have now created the Opportunity to Escape). Sensing this opportunity (your mindset moves back to transition, your body goes from fight to flight state, and your emotions go from violent to protective mode, you flee into the safety of the store (DISENGAGE).

In this situation you applied the 5D’s self-defense.  The use of the verbal boundary setting in the DETER step provided you with confirmation of bad intention  that the man was dangerous. Had the man not intended aggression, he would have responded and stopped upon hearing your verbal command of, “BACK OFF!!”  Once your conscious mind had been convinced of the danger, your mind began the transition to subconscious mindset.

Your protective emotions sensing danger and the need for immediate action called upon your body for adrenaline. As a result, your body went into the adrenalized state. When the man reached out for you, he crossed your boundary and you responded to the Trigger to Act which transitioned your mind into subconscious mindset, your emotions into violent mode, and your body into fight state. You now have maximized your effectiveness to DISRUPT your attacker.

You used the strategic tactic of attacking the attacker and the physical tactic of using targeted unexpected focused explosive strikes (TUFES) to instantly and repeatedly strike the man in a sensitive area in order to create the Opportunity to Escape.

News Stories that Illustrate the 5D’s

The 5D's of Self-Defense may be used to make sense of the different stages that occur in a self-defense situation as described by news stories.

Police said the girl’s self-defense training (DECIDE) helped her escape Carl Moore after he began fondling her and demanding sex. When she screamed (DETER), he allegedly grabbed her throat but the girl bit one of his fingers (DISRUPT), hit the alarm and fled (DISENGAGE) as the doors open.  She reported the incident to police. (DEBRIEF)

“He grabbed my wrists and told me to get into the car,” she said. ‘I guess it’s just instinct I hit him in the face,’ (DISRUPT) and he let go.” (DISENGAGE)

“He said to get into the car and I kicked him (DISRUPT), then I grabbed my arm away and I got on my bike and went home.” (DISENGAGE) said Emily, who learned how to fight from her brothers. (DECIDE) “They said whenever someone tries to hurt you, kick them as hard as you can,” (DECIDE) said Emily.

In terms of the 5D’s of Self-Defense, in order to begin the actions of DISRUPT you need three elements:

Confirmation of Bad Intention - The realization that a person has malicious intentions and means to do you harm.

Trigger to Act – The event that propels you into decisive action to disrupt and disengage from your aggressor.

Much of the actions of DETER are intended to prevent and repel aggression. But they also build readiness for immediate action by priming your body with adrenaline. The use of aggressive verbal boundary setting will inject your body with a surge of adrenaline in preparation for fight and flight.

If your aggressor penetrates your verbal boundaries, you have been provided with Confirmation of Bad Intention. It is this confirmation that will enable you to execute the actions of DISRUPTING your attacker with complete conviction and commitment.

This video is useful for examplifying the Trigger to Act in the transition from DETER to DISRUPT.

In this case, Confirmation of Bad Intention is established from White Shirt's overall behavior. There are multiple Triggers to Act. Each time, White Shirt signals a Trigger to Act via an aggressive action, Black Shirt responds with a progressively higher action/counter-measure.

Erik Kondo
If you think self-defense is mainly about physical fighting or that only those with a long history of personal involvement in violence have an opinion that is worthwhile, feel free to skip my contributions.

While I do have multiple years of training background in a variety of martial arts, particularly Small Circle jujitsu, my focus in on helping the average person make sense of self-defense.

I see self-defense as an extension of personal safety which is an extension of how you live your life. My goal is to help people learn to minimize the negative consequences of aggression and obtain peace of mind through developing better understanding, critical thinking and judgement in times of interpersonal conflict.