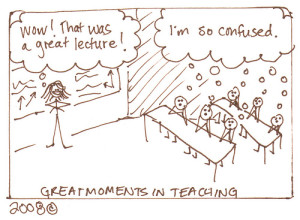 It is not the student’s responsibility to understand you.  It is your responsibility to make yourself understood. It is rare in martial arts or self-defense that junior instructors are given any training in how to teach.  You earn your black belt (sometimes not even that) and you step into a teaching role.

(Part of this is an artifact of the dan/kyu ranking system.  As I understand it, Kano had instructors wear black belts and students, white.  Later instructor-candidates wore the brown.  That’s an aside, maybe.)

So we have people often simply teaching the way they were taught, or teaching things that they may know but they do not understand.

Teaching the way they were taught.  In many of the so-called traditional arts, the first people to bring the art to the west had been members of an occupying army, being taught by former enemies, often through poor translators, and taught to large groups.  None of this was the same way that the same instructors taught their friends or families.  But because it was the only way they had seen it taught, it became the way to teach.

Knowing but not understanding.  This is huge.  There are many things that I was technically proficient at that I did not understand until the rubber met the road. The jujutsu etiquette of the two-man kata seemed like an anachronism until I realized that the way you hand a wakizashi to uke were mirrors of the “action open, safety on” protocol of handing a firearm over.  Etiquette between dangerous, armed people is almost universal.

Without understanding, you can pass on a certain technical proficiency which might fail or be incomplete in the real world.

Whatever you teach must make sense and it must be true.  Stories about ancient monks and platitudes and statements of certainty will resonate with many students.  They will attract a certain following and they will appeal to the koolaid drinkers, the ones looking to feel safe, not to be safer.  People love stories.  Many students will willfully suspend their critical faculties because you wear a black belt.  That is no excuse.  In martial arts and especially if you claim to teach self-defense, the price of error is blood.  The luxury of an instructor is that it will not be your blood.  That makes bullshit more reprehensible, not less.  It adds an element of cowardice to it.

This third and last installment of the Articulation series might seem incomplete.  Fewer examples, less advice on right and wrong.  Know this: Teaching, like any form of communication is a skill.  If you have taken up the responsibility to teach, you have also taken the responsibility to teach well.  If that means breaking out of the box of tradition, so be it.  If that means going deeper, so be it.