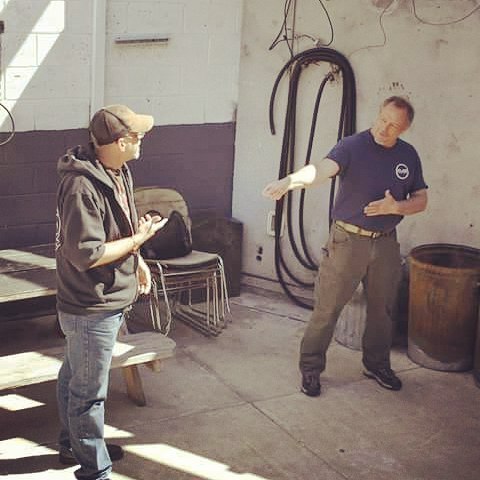 It tracks for other things and it generally tracks for other people. One of the issues with writing from personal experience is that you can’t really know whether something you notice is idiosyncratic to you. One stupid example– I tend to remember high-stress incidents in mirror image. I’d go over a force report and everything in there was exactly what happened, except everything I wrote that I did with my right side, e.g. “I then knelt on the side of XXXXX’s head with my right knee to immobilize him against the ground.” I’d actually done with my left knee.

How idiosyncratic is that? Without the combination of force incidents + report writing + report review I wouldn’t even know. Same with the idea of experience thresholds rewiring your brain. Internal change is usually imperceptible unless you have a mechanism to bring it out. Or a combination of alertness and luck.

Kathy Jackson over at The Cornered Cat is one of my “Honorable enemies.” She’s a good friend who has no hesitation in telling me when she thinks I’m wrong.

One of my threshold observations was that people who has prevailed in a single violent encounter were consistently the worst teachers. These were the ones that felt there was only one right answer, whether it was rage or fitness or speed or power or… the one thing that had worked was the only thing that could work. And, because all thinking humans know that’s not true, these instructors had a constant cognitive dissonance they needed to resolve. As a result, the students they attracted were not students at all, but just pawns in their self-therapy.

Kathy pointed out two instructors who were superb, but each had one violent encounter. Which made me dig a little deeper.  She was right. But those two instructors had not prevailed by any stretch of the imagination. They had survived on luck or the intervention of others.

One of the other things that rewires your brain is to be absolutely sure that you will die in the next few minutes while being absolutely sure that there is nothing you can do to change the equation. Situations of complete helplessness exist, and I think almost everything we do as societies and individuals is geared, at least in part, to deny this truth.

These two instructors had hit that rock-bottom of helplessness and were allowed to live. And it has driven them to become the best they can be. They have the constant bullshit filter of their own experience and a drive to push their limits. They’re extraordinary instructors.

Recently, Kathy pointed out another pattern. The experienced, effective, skilled operator who has that feeling of total helplessness late in their career.

Simple truth is that no matter how alert, fit, skilled, experienced, equipped… name any combination you want… there is something out there that can crush you like a bug on a windshield. The incidents are rare, so most will never face them. And if you do face them and die, which is common, you don’t have to work out the emotional issues afterwards. But when you hit complete helplessness and live, that can really mess you up.

We train to be harder to kill. That’s cool. It’s cool right until we become invested in the identity. When we start to believe that we can handle anything. Confidence is fine, but when it is not paired with humility and the sure and certain knowledge that the world is bigger than you and can bring you down, it creates a vulnerability.

So the tough guy (and I want to write swaggering, but not always) who has convinced himself he is the best of the best gets rolled. Nothing he had was enough. Maybe he wakes up in the hospital fully aware that the only reason he’s not in the morgue is pure dumb luck, or the whim of violent strangers.

The pattern? Generally he goes out on one more mission to prove he can still “get back on the horse” and then he transfers from operations into teaching. He fantasizes extensively about what might have worked in that one encounter and when he thinks he has something that might have worked, he insists it would have worked. And he teaches that, obsessively. Not the hundreds of other things that did work in real life before the one incident. The fantasy that makes him feel less vulnerable.

Like the instructor with only one encounter, it’s not really teaching. It’s self-guided therapy. And the students are just pawns in that therapy.