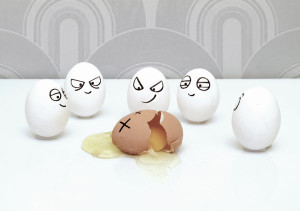 I was asked a while ago to put something together for Bullying. It’s getting a lot of press. There are a lot of programs, and people seeking more. I refused. The simple fact is that the people who want those programs want a magic solution and there have only ever been two things that work in preventing bullying:

That’s it. Not making friends or telling jokes and definitely not complaining to a teacher, especially in an environment where the teachers can do so little. Be invisible or make the bully pay. And no one wants a program that advises little kids to band together and beat the bully up on the way home.

There is a lot of bullshit about why bullies are bullies. I don’t think it’s complicated. Bullies are bullies because it is fun. The sense of power may be working on some Freudian security issues, but we don’t have to look all that deep. Expressing power is fun. The perfect judo throw. Center shot out of a target. Overhearing people talk about something you’ve made. Putting up a bookshelf. Anything that affects the world is inherently fun. Including making weak people scream. We have to learn to get over that (a toddler doesn’t automatically know that squeezing kitty is bad and if the kitty makes noises but doesn’t use claws, the toddler will continue to squeeze) and whatever needs are fulfilled, we learn to fulfill them another way. This is maturity and growth. But don’t assume it is natural. It is an act of will and rarely an internal act. We are taught to be kind.

That’s a lead off. Last month I witnessed a superb act of bullying. It was targeted, organized and even orchestrated… and not one of the people hurting others for fun realized they were doing classic bullying. Bullying is not just the strong targeting the weak. The weak will bully too, if they get the chance.

Can’t go into too many details here, so bear with me.
A certain organization had organized an event to talk about a community. They had done this many times in the past, very successfully and were very well received by people in that community.

Another group of self-appointed advocates for that community demanded to know who at this event were in fact members of that community.

The organizers didn’t know. And you know what? They couldn’t know. HIPPA prevents even asking the question.

The self-appointed advocates (I think I can safely say I’m at least on the fringe of that community and I sure didn’t appoint them) started a massive (for this area) e-mail and tweet campaign. And they got what they want. The organizers cancelled the event.

Bullying worked. But it wasn’t enough. That one sign of weakness triggered more vitriol and demands for an apology. And that’s the thing, whether the bully is weak or strong and whether the bullying is done with messages or fists, the purpose is to hear the victim squeal. To revel in the power of forcing the victim to obey.

And some of the scheduled participants, on their own, held an informal talk anyway. Because they didn’t like being bullied. And you know what? They weren’t bullied. None of the ones who stood up. But the complaints and slurs and bullying redoubled on the ones who had given in. Bullies hate being defied.

You get the idea. It’s easy to look around and see all the bullying behavior done by people who label themselves ‘victims’. And it works on compassionate people. It hurts the people who are most inclined to help. But whatever they say, whether protester or community activist or self-appointed spokesman, it is about reveling in the power to coerce others.

Much harder to look at yourself and see where you do this. But you probably do. It’s human behavior. It’s also human behavior to grow out of it and find the thrill of power in protecting and helping. Or so I hope.