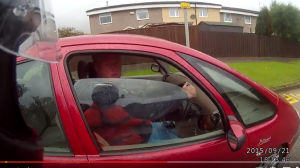 In Episode #15, we see the results of entering the Monkey Zone.

Most people have heard out being in the “Zen Zone”. This is commonly thought to be a mindset of high performance. A mindset where a person is not fully conscious of his or her actions. but is performing with subconscious competance at a very high level. Many martial artists refer to this state as Mushin which is translated as “no mind’, or being in “the Void”.  A major component of this state is the lack of emotion. The mind is free from thoughts of anger or fear of consequence. Therefore, a person’s mind is able to direct his or her body without intention or attachment to a particular result. It flows like water.

But there is also the Monkey Zone. This state is similar to the Zen Zone in that a person is not fully conscious of this or her actions. The person acts without thoughtful consideration of the consequences. But unlike the Zen Zone, this state is dominated by the emotions of anger or fear. When a person enters the Monkey Zone, he loses the ability for rational discourse and critical thinking. He maybe still able to speak, but what is said, makes little sense. His or her judgement becomes impaired.

The deeper a person goes into the Monkey Zone, the less rational he or she will become. He will still be able to perform basic functions such as  talking, walking, running, driving, riding a bike, instinctive fighting, etc. But his or her judgement will be severly compromised. Instead of not being attached to a result, he is consumed by his attachment to the end result. Usually in a social conflict, this end result is a defense of his ego and pride at all costs.

Just as spectators are thrilled by the superior athetic performance of those in the Zen Zone”, the public is equally entertained by the outrageous/irrational actions of those in the Monkey Zone.

Before the advent of video cameras everywhere, a person in the Monkey Zone would only be observed by those in the immediate vacinity. Now, that is no longer the case. If you enter the Monkey Zone in a conflict with someone else, there is a high probability that your image and recorded actions will end up on YouTube, Facebook, and/or other social media. The video clip can be edited and modifed. Actions can be taken out of context. Music and subtitles may be added. The video may go viral and be viewed thousands or even millions of times.

Beware! Enter the Monkey Zone at your own peril.

The Monkey Brain by Marc MacYoung

The Monkey Dance by Rory Miller