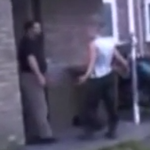 In this episode of CMM, we learn from a conflict between a homeowner (local martial arts instructor) and the neighborhood bully.

Actually, no, yes, maybe, kinda, sorta … this video will give you false expectations about violence. (Doncha jes’ luv simple answers?)

A solid argument could be made for the home owner waiting too long. Baldy had crossed the line several times already by making physical contact. Now granted, the home owner’s control and patience worked out … but that doesn’t necessarily mean it was a good strategy.

More than that things worked out in a way — that by allowing several contacts — by the time the homeowner did physically engage … well let’s just say that baldy could find sympathy between shit and syphilis in the dictionary. He’d crossed the line so many times there is neither social or legal support for him. (Using a writing/genre analogy, often in thrillers the transgressions against the protagonist are so severe that that the audience/reader actually cheers over the good guy committing homicide/murder.) Good luck with Baldy running to the cops and trying to lodge a complaint.

The fact that the homeowner didn’t pummel him or stomp him on the ground, is a big hats off to H.O. It’s also what will keep him out of jail if the coppers were to show up.

That’s the plus side. To understand the potential problem, you need some background references. Watching Baldy you see what is, in essence, a slow escalation.

This as opposed to options #1. That’s getting in the last word, last display, last act of ‘fuck you’ — whereupon he swaggers away having impressed upon the world the fact that he is the possessor of a gargantuan phallus. The goal of certain types of conflict boils down to this kind of dick measuring display (which is rather awkward when women do it). THESE circumstances are where waiting, keeping self-control and remaining calm is the best strategy. Let him make comments about your mother’s sexual habits and storm away. Elvis. Has. Left. The. Building.

Option #2 is what happened. Every time Baldy gets away with an unacceptable behavior he chooses to escalate more. But he does it in a slow, repeating pattern. Now there are many possible reasons for this. One of which is the person is emboldened every time there is no negative response. (I got away with this. Can I get away with this now? Etc., etc.) Another possible reason is Baldy wasn’t getting back the signals ‘he knew’ meant he was getting through or was in danger. (This often causes a floundering ‘whaddido?’ slow escalation.) This last possibility must be considered because — if that’s the case — than the calm and self-restraint of the homeowner actually caused the situation to escalate.

Option #3 is where potential disaster lies. See Baldy did a slow escalation, not a fast one. There are many people who, had they gotten away with previous contacts would have turbo-boosted into a blitzkrieg assault. ANY time that Baldy was in attack range or made physical contact, he could have shifted into a blitzattack against the home owner. The homeowner’s neutral strategy — while it would have worked with #1, was a crap shoot with #2 — would have turned into disaster with #3.

Now watch that video again and see — while it didn’t go bad for the home owner — all the times it could have.

Yes the homeowner showed amazing restraint and self-control. It worked out, this time. It just as easily could have gone wrong.

NOTE:
My intention is not to criticize the homeowner. What he did worked. Never forget that.

My intent was to point out to people do not try to make that a standard. Not all physical conflicts should have that much ‘patience’ before deciding to act. Because, as I pointed out, had the circumstances been different, the outcome of that strategy could have been a disaster.