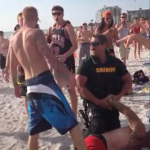 Conflict Management Media – CMM provides examples of the principles, concepts, tactics, and techniques of both conflict management and conflict mis-management.

In this Episode, we learn from an incident where a large cop deals with drunk boys on the beach.

Episode #9: The Cop and the Beach Boys

“Well its hard to tell what all the contributing factors are to this situation but here is my simple take.

That officer has had some serious training. He didn’t pull a gun, a tazer or pepper spray. He just used his natural talent size and presence. He applied just enough force to control the first Ass Hat and get him under control. Notice he didn’t beat the guy senseless when he had the opportunity. Nope just controlled him and threw him down. Nothing like the fear you get when large hands are wrapped around your throat and you are looking the devil in the eye. Surprised there wasn’t more urine involved. I have had guys piss themselves when I have done that.

Cuffed him and controlled the first threat. Then comes Don Quixote the gallant savior. “I must rescue my buddy from the Evil Police Officer, stopping him from acting like a complete Douche Nozzle which is his right! ” Officer Godzilla doesn’t take out a gun and shoot the dumb sumbitch. Nope, he just assesses the situation and uses his strength to throw the guy around till he can get him under control.

I love the part when the officer applies the front choke hold and dumb ass starts tapping out. LOL at that one. Did ya’ll notice the people kicking sand on the first one. WOW, that says a million things about the social interaction level of the human primate. Then to save the Red Head Dick Wad, people stepped in and helped restrain him. Some folks weren’t as drunk as you would think for the situation.

All in all I must say the only thing I didn’t like was Officer Godzilla didn’t have enough backup from other officers. But in situation with that many people involved, the county, city and state are hard pressed to find enough officers to fill the role.”