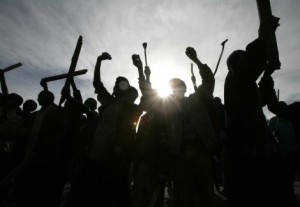 In some ways this all comes close to the Intent-Means-Opportunity triangle.  An immediate threat has to have all three.  Most of the time, you are the resource, the source of intent.  the threat is his or her own means and the terrain and your behaviors supply the opportunity.  But that’s kind of simplistic.

Social and asocial are done for different reasons and so they have different requirements, from the bad guy’s point of view.  The primary difference is that in most cases, social violence requires an audience.  For asocial violence the audience magically turns into witnesses. Some of the types of social, like the bonding GMD, are social within the group but asocial between the group and victim.  And some, maybe most, bad guys will try to get social benefits from asocial crimes (bragging about a mugging, for instance) or vice versa (going through the other guy’s pockets after winning a Monkey Dance.)

So that’s the big one.  Presence of others: generally social.  Absence of witnesses: generally asocial. Presence of a bonded group and you are alone: bad day for you.
Exception: certain types of predatory acts do use the crowds as camouflage. But by their nature, they can’t be extended scenarios.

Second, the behaviors are different.  Social behaviors, even if they are going to violence, are normal.  We perceive them as normal because they stay on a script that we all know.  One of the things that makes predators so effective is that:
1) We are wired to assume and expect the scripts (corollary: when someone is clearly going off script most victims don’t recognize it)
2) Many, especially the socially skilled and especially sexual predators, mask their predatory tactics in the social scripts.  For instance, there is a natural progression in romance where a couple meet, enjoy each other and gradually want to spend longer times in more privacy.  Which is also exactly what a process predator wants.  Predators learn to accelerate the natural process.

For our purposes, I’ll call the social behaviors (including the social violence behaviors) ‘normal.’  People don’t consciously recognize normal, and without that recognition, abnormal (predatory) behavior is often missed, dismissed or excused. Missed- not seen at all.  Dismissed- seen, but ignored as unimportant. Excused- acknowledged as odd but doesn’t count because there is probably a perfectly good reason.  So victims either don’t see or ignore the warning signs.

Aside- One of the secret deeper reasons that I teach SD law as an articulation class instead of a decision making class is that if the person can explain things to a jury, they can also explain why they need to act to themselves in the critical seconds.  That helps some people slip the leash.

So you have to know normal consciously before you can recognize abnormal.

Basics are proxemics, facing and stance, hands and structure, and group behavior.

Normal proxemics varies widely across different cultures.  In North America and most of the places in Europe that I’ve visited, the comfortable distance for a stranger to stand is about a half pace beyond arms reach.  You will get a creepy feeling if people stand too close and you will elicit a creepy feeling if you approach inside the bubble.  It’s an easy experiment to do.  This distance changes with intimacy.  Acquaintances are slightly closer, friends closer than that and intimates very close.  And there is a very particular range+eye contact that you will see with cons who have done prison time together– standing very close but looking past each other’s shoulder.

This bubble is not round.  It’s best to feel this rather than read it, but that creepy feeling isn’t engendered by a stranger approaching from the side until he is much closer.  Well within striking range.  It is even closer behind.  This is why we can handle stadium seating and sitting together on buses, but tables are a certain width.

The normal approach is to stand in front of you at the edge of the bubble.  An experienced predator will, while acting friendly and social, generally approach from the flank to be in striking range. (Not addressing ambushes from the rear, only the stuff you can see coming.) So, normal is from the front, out of range.  Anything else should put you on alert.  But remember this is very different in different cultures.  If you try to insist on your bubble in Arabia or South America do not expect to make friends or be accepted.  There are profound tactical reasons for maintaining a certain distance but sometimes the strategic reasons trump the tactical.  And remember, you are looking at signs of abnormality for danger, and normal/abnormal is measured from the threat’s conditioning, not yours.  Someone from a close culture who maintains distance may read as sensible to you, but he might well do it because of mental illness or excessive aggression.

Facing and stance.  The normal monkey dance fighting stance is one of the stupidest possible ways to stand for fighting.  The combatants tend to be up on their toes, bouncing, arms akimbo and with feet and hips perpendicular (side to side) to the threat. And usually tense with muscles bulging.  Slow, stupid, no base and with targets exposed.  It is an attempt to look big, like a cat puffing out its fur.  Understand that even well trained martial artists also tend to do this if they get their ego involved.  It’s an emotional reaction and is the default if you respond emotionally.  It is profoundly inefficient.
Almost all normal (social) interactions will have that foot position.  Social violence will have the crappy posture and foot position but will violate the bubble from the front.

A predator will blade up.  He will have his power in line with his target (you).  One of the elements that people miss, ignore or dismiss is that he may keep his shoulders and hips square with his feet bladed.  feet are important, not the rest.  The other thing is that if the threat approaches from the flank and faces the same direction as you it feels friendly (facing the same direction mirrors your body language) and the feet are naturally positioned for the power to be in line with the target.

Inexperienced predators may not know this.  Early crimes it is common for the threat to have no more experience than you do.  (He will get mentored later, or learn by trial and error).  So you may be mugged by someone giving all the signals of social violence (up on toes, shitty stance, loud) but with a gun.  Is a gun part of normal Monkey Dance behavior?  No it is not.  Therefore this is abnormal therefor probably predatory.  And this situation is very touchy.  Resource predation plus a fragile ego and a firearm is a recipe for disaster.  If the threat feels endangered or disrespected he will erupt.

That’s feet.  Next hands. If there is a weapon, that tells you two things.  First, this is a potentially very bad day and second, he wanted you to see it for a reason.  If you live in a weapon culture, you know the rules of social violence (dueling) in that culture better than I do.  In my culture, monkey dances don’t involve guns or knives.  If a weapon is involved it is either a predator or someone who was recently humiliated in a Monkey Dance trying to get his manhood back.

Aside– Do what you need to do to survive, but never humiliate any one.  It never serves any purpose other than to stroke your own ego.

If a hand is out of sight, it could be good or bad.  No one keeps a straight arm with a hand hidden behind a thigh.  No one just rests his hand on his back hip under his jacket. But a lot of people stand with their hands in their back pockets and a flat hand like that means they feel no threat.  (This is a stacking point here: unusual body positioning plus signs of adrenaline?  Big red flag.  An alert individual showing extremely relaxed body language in a clearly dangerous situation?  Big red flag.)

Precursor moves.  Most people, for whatever reason don’t just hit.  They pull back first.  They think it feels more powerful.  This chambering or loading is often disguised as turning away or glancing around– and that last sweeping glance of the area is a final witness check just before things go down.

Groups and places.  If there are only two people at a bus stop and they are strangers, they keep distance.  All guys know the urinal rules.  There is a pattern to where people stand and which direction they face as  an elevator fills.  People that know each other stand together and talk.  If they see you, go quiet and split up, that’s likely bad.

So with groups you look for coordinated movement, any separation that makes you the apex of a triangle or any static positioning that makes you walk between two people.  In pack behavior you look for groups (usually young men) moving purposefully or trying to intimidate/get a reaction from others.

All of this could be expanded, but these are the basics.

1. This is a DECIDE stage in terms of the 5D’s of Self-Defense – DECIDE– DETER-DISRUPT-DISENGAGE-DEBRIEF
It deals with educating yourself about the nature of violence, crime and criminal behavior.

2. This is also a 5th Dimensional category (Violence Dynamics) in terms of the Multi-Dimensional Paradigms of Self-Defense