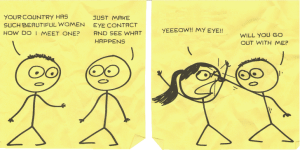 There is a lot of input on social rules for eye contact and there are profound gender differences and cultural differences.  Your history and depth of understanding will deeply affect how you use eye contact for communication. It is huge.

But it’s not just an external thing.  Absolutely, people will read a message in my eye contact.  As Mac has been known to say, “I want them to look in my eyes and see the price of admission.”  With a glance, certain people can raise the stakes beyond what all but the craziest are willing to pay.  Different contact, different message.But eye contact also sends a message to yourself.  The way you look at the world not only affects how you see but affects how the world responds, it affects what does and doesn’t work.In the external/communication analysis of eye contact, you send a message:
Downcast eyes: “I am no threat to you.  You have no need to hurt me.  Please don’t hurt me.”
Interested look at the face: “You are interesting and I am learning.”
Hard look in the eyes: “I am bigger and stronger.  I am the boss here.”
Not looking, but not downcast: “You are not the most important thing in my world.  You are no threat to me.”In the internal world, the same levels of eye contact do something to you as well.
Downcast eyes: Not just signal meekness but force you to be reactive.  Partially physically, but mostly emotionally, the downcast eyes completely cede initiative.  Anything you do from here will be in response, not an action.  Not finding the words… communication aside, if you can’t make eye contact (some auties excepted) lowering your eyes internally turns you into the kind of person who will not act.  It is not just a sign of passivity, it makes you passive.
Interested look in the face: Makes you interested and curious.  It opens your perception and helps you quit being self-centered.
Hard look in the eyes: Sets you to take control of your world.  Turns you into the kind of person who will assert him or herself.  To an extent, eye contact is a sign of assertiveness, but it is also a step to becoming assertive.
Not looking but not downcast: Relaxes you.  By removing the personal element, the need to prove, it turns you into the kind of person for whom this (whatever ‘this’ is, including various forms of violence) is just a job.  Something to be done efficiently.These aren’t automatic, but the point is that eye contact (like posture and breathing and other things) doesn’t just change the way the world sees you.  It literally changes who you are.To NRY’s point– when you have a group that have the dominance games down, who enjoy rolling, if you are paying attention you will notice all kinds of inefficiencies creeping in, most of them types of signals.  Some people actually believe that pulling back your fist makes the punch stronger and I’ve heard some pretty detailed, mathematical sounding excuses for it… but as near as I can tell the real purpose is to give the other monkey just enough time to turn this into the kind of contest that might impress a chimpanzee female.  There are aspects of exploiting momentum that are very hard for young men to do because in order to send the dominance signal and show their strength, they have to piss away the momentum they are trying to exploit.I want them to be hunters, not fighters.  To be beyond any concept of contest.  It’s a different level than merely ‘flipping the switch.’  Maija sent me an e-mail a long time ago pointing me at an article.  I can’t remember who wrote it and I’m basically too happy right now (G&T on a Mediterranean beach with local calamari and shrimp stirfry on the way) to search through old e-mails or I’d link it.  But the guy used the old:

But he added another layer that made perfect sense to me, a consciously unconscious competence.  You don’t have to think about what you are doing, but you are monitoring it, aware of all the surrounding stuff, making decisions…but it doesn’t interfere with the physicality of it.

You see it sometimes in a really good instructor who is sparring one of his students while watching the others.  He stays smooth and relaxed, doesn’t get tense, if anything spars better than when he is focussed and, the weird part, if the student he is sparring does something dangerous, the instructor just drops him without engaging at all on an emotional level OR if he sees the students he is watching do something unsafe, he can step away from his own sparring session in such a way that he doesn’t get touched and sometimes his ‘opponent’ even loses balance as if it were nothing.  Because, internally, it is nothing.

IF you can get to the place where none of this is important (and that’s a big if) your efficiency goes off the charts.  Not just that you are less likely to subconsciously communicate instead of remove, but also because you are more likely to see the real situation, the real problem and the real goal…not your internal interpretations.

Sorry if this sounds a little outside the ballpark, but there are some huge epiphanies on that edge and this is one of them.

COMMENT by Erik Kondo
1. This is a DETER stage in terms of the 5D’s of Self-Defense – DECIDE- DETER-DISRUPT-DISENGAGE-DEBRIEF
It deals with using body language to actively DETER someone from selecting you as a potential victim by sending a non-verbal message.

2. This is also a 2nd Dimensional category (Awareness and More) in terms of the Multi-Dimensional Paradigms of Self-Defense

3. It is a Visual Fence tactic in terms of the Progressive Fence. Your low level fence is the use of body language as a means to ward off unwanted attention.