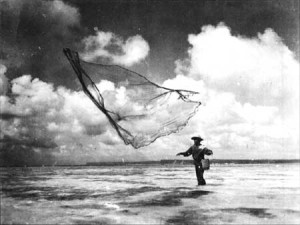 … or phishing.
One thing every predatory criminal needs is privacy. The quality of privacy depends on the type of crime. Beating a member of your gang that you suspect of breaking the rules might go better if the other members can watch, but you’ll certainly limit civilian and police witnesses. The quantity of privacy varies as well. Rape and torture murders can take days, muggers may only need privacy for a few seconds.

There are only a handful of general strategies to get some one to a private place. You can intimidate them, trick them, lure them, follow them or wait for them.

Not always. Just like fishing you can try to match the lure to the specific fish you want or you can cast a wide net. In “Think like a Freak” the authors pointed out that it might seem stupid that the Nigerian scam emails you get actually say they’re from Nigeria. Everyone’s heard of the Nigerian scam, right? But when you cast a net that wide, sending thousands of e-mails, you want to weed out the bad prospects as early as possible. If I send 1000 emails saying I need help getting millions out of the Nigerian bank, the 995 who recognize the scheme and don’t answer have allowed me to concentrate on the five that might fall for it. Efficient use of time.

One personal version. “Hey, you from America? I love America. You know, there’s a shrine that’s not on the tourist map. It’s a little far…” Which, could be targeted to the person trying to go native and be different from the other tourists, but works just as well if you ask every tourist you see.

When the isolation strategy is targeted, there will be some element of intelligence gathering. Surveillance is a possibility, but following someone for days to figure out his or her routine should be rare. Very labor intensive, far more evidence of premeditation, and I can’t speak for other people, but I always thought the Hollywood cliche of the target who has the same meal at the same restaurant at the same time every day pretty damn unlikely.

Most intel gathering comes in a simple conversation– the phone call claiming to be from the IRS is a big one now. Ted Bundy would strike up a conversation with a woman in the library on campus. In any first conversation at a university, three things come up: “Where are you from?” “What’s your major?” and “Which dorm are you in?”

It’s rapport building. Knowing your hometown tells me about background we have in common. Your major is a big clue both to the possibility of common interests and how you see your future. Where you live on campus tells me your socio-economic background and how social you are. But Bundy used the routine questions for something simpler.

If you ask a target at the library where the target lives, you can scout the loneliest place between the library and the home.

It can be hard to spot someone gathering intel. Like many long-term crimes (e.g. creating a relationship so the predator gets the victims home and access to bank accounts and can groom a victim), the criminal excels at imitating the steps of a normal relationship. Ted Bundy used the normal conversation scripts to extract the information he wanted. There are a finite number of tools, good guys and bad guys use the exact same tools.

The best exercise, from my point of view, is to practice it from the other end. Strike up conversations with the intent of finding out as much as you can about the other person while giving up as little as possible about yourself. Don’t lie, just focus the conversation back on the other. Not only will very few people notice you aren’t answering, they’ll be flattered to be the center of attention. And they’ll spill their guts.
Seeing how easy this is will help you recognize when you are on the receiving end. It will also teach you how rarely it is necessary to share. And, weirdly, the focus on others can even make you more popular.