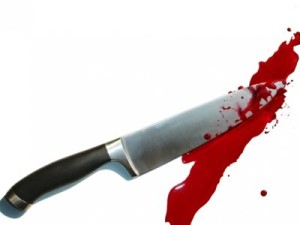 Don’t be the kind of person that someone else would want to stab. Marc MacYoung likes to say that the two best knife defenses are to avoid are: 1) to avoid the drug culture and 2) don’t sleep with other people’s mates. Almost every stabbing I could think of was over something, and it was over something big enough to make it personal and it was between two people at least one of whom was cool with stabbing.

3) Don’t go places where people stab each other. This ties in directly to Marc Denny’s “Avoid stupid places with stupid people doing stupid things.” Random stabbings are rare, but they happen in predictable places.
Run. If you don’t have to engage, you don’t engage. If you have time to ask yourself, “Should I engage?” the answer is, “No.”

4) De-escalate. If you can talk your way out, do so. Most of the time if you have an opportunity to talk, the goal is not to hurt you. The weapon is displayed to get you to hand over your wallet. So more accurately, some of the time I should say, “Don’t escalate.” Don’t say anything stupid. If you challenge his manhood, he’s likely to use the knife even if that wasn’t his attention.

And be aware, right here, that almost all of this from de-escalate on comes from the viewpoint of a male martial athlete. A victim being intimidated to a secondary crime scene goes into a different flowchart and may have to make different choices. A knife suddenly at you neck and the words, “Give me your purse” are not the same situation as the same knife and the words, “Come with me. Don’t make a scene.”

5. Brainstem. If it is going to engagement, you take out the brainstem. Get this, all of the physical responses are low percentage, and there is a matrix somewhere of ease of execution, likelihood to work and whether it finishes or delays the situation. This will be heavily influenced by your skill and your training. EV has long arms and great power and has made a practice of hitting brainstems shots from a number of angles. A different individual may or may not be able to make it work.

6. Positioning. Done properly gives you options and protects you without tying up your hands.

7. Compromise structure. This may be better than positioning or worse than limb disabling or not. I think where this goes on the list depends a lot on your fighting personality. But either destroying a leg or twisting the spine have their uses. And their dangers.

8. Disabling the limb. If you can pull it off.

9. Defanging the snake. Disarming in other words. Technically difficult and low percentage, but the big change from a lethal encounter to an unarmed encounter moves it up the matrix.

10. Controlling the weapon arm. Might buy you a second, maybe two, but it generally ties up (unless you do it by positioning) two of your hands to his one. To think that someone is ‘so focused on the knife he will forget to hit you’ is what we call wishful thinking. It is not strategy.

11. Simple blocking. Lot’s of issues with it. Reactive so it tends to be too slow, doesn’t finish anything or even slow anything down. So if it works, and that’s a crap shoot, you are in exactly the same place you were.

12. Simple pain. I have no problem with adding pain. For that matter you can stack as many options as you can handle. Use them simultaneously. But counting on just pain, whether a pressure point or a shin kick to stop someone adrenalized to use a knife is very, very low percentage.

Not definitive, not absolute. Especially not prescriptive. I think I got more out of arguing where to place these than I did from the list itself.

But there was one other thing, and I want you to look at it– it’s not a perfect correlation but it looks very much like most training spends effort in the opposite order of effectiveness, or near enough. Far more hours in most schools are spent on blocking than on positioning, for instance. Is this because of misplaced priorities? Or a lazy tendency to teach the things that are easiest to teach regardless of effectiveness? Or some belief that the low percentage options require more training so we train them more. But I don’t think the math works on that excuse.