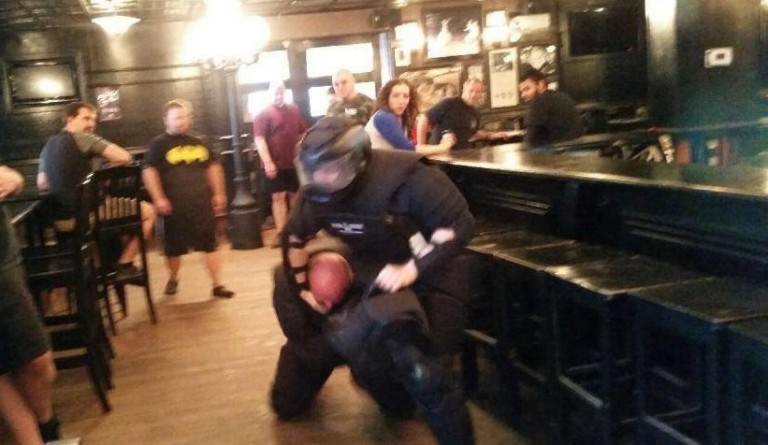 This should probably be a book, honestly. Maybe an e-book. I’ll keep you posted.

Scenarios are an attempt at what Tony Blauer calls the constant search for the best fake stuff out there. All training is fake. If you are learning to send people to the hospital and people don’t GO to the hospital, every rep of skill is combined with a rep of a bad safety habit. That’s just the way it is.

At the most primitive level, scenario training involves bad guys in armor and a cluttered/realistic environment. The armor lets the student unload. The environment either lets the student be creative or points out that they aren’t creative and their brain is stuck. But that’s primitive, because it still deals with the problem as if it were one of physical skills.

So here are some points:

1) Scenario training always has a purpose. This is an explicit purpose, and one chosen in advance. To face a common or deep fear. To force a student to keep fighting. To help them see a developing situation. To test their legal judgment or tactical awareness. To find the little part that still thinks this fighting like a comic book– that little part will get them killed.

2) The best purposes are tailored to the student. If I know you can fight, I will test whether you can tell when to fight. Whether you have the capacity to run when it is prudent. Whether you realize that crashing out of a ring of threats to escape is a qualitatively different skill than defeating a threat. If you have given me a clue that you have doubts about your ability to injure, I will put you in a scenario where you have to unload…and I will describe, probably graphically, what you strikes would have done had I not been wearing armor.

3) It takes good role-players. Through a mask, the role-players must be able to show the difference between an inexperienced and hyper-adrenalized mugger and an old con who has done a hundred robberies. The students should be able to glance at you (in full armor) and get a vibe that you are young or old, male or female or whatever you need to project.

4) The role-players have to be sensitive as well. Not in the “I don’t want to hurt anyone’s feelings” sense. Screw that. Part of being a bad guy is taking delight in hurting people at their most emotionally vulnerable points. By sensitivity I mean something that’s a little hard to explain without an example. Sunday, one of the students, Robert, just kept moving while I was trying to incite a riot. I could tell by my own feelings that there wasn’t enough of a hook there for a bad guy to work himself into the right kind of frenzy. If I had been insensitive I might have escalated it where a real threat wouldn’t, and inadvertently punished Robert for a good tactic. That’s bad training. Good tactics should be rewarded.

5) You have to guard against ‘weirdness creep’. There are a handful of things that are likely to happen. I keep a list of 25 good scenarios with me. For the students, these are cool and new. I’ve done each of them dozens of times. Role players get bored. So what do role players do? They have to fight the tendency to make the situations more ‘interesting’ read: weird. If I didn’t guard against this, we’d have scenarios with trained ocelots and laser-guided sharks.

6) The debriefing after each scenario is a special skill. The student should do most of the talking, not the instructor (DO NOT use a group of students to show off your own tactical intelligence. Primarily, because it is useless for the student. Secondarily, because no matter how many times you have trained the scenario, when the shit hits the fan for real, you might do no better than anyone else. Accept it. Grow up.) Thanks to Peter Breton, who sent an awesome e-mail about his own scenario, I’ll be looking at these from both a tactical (including legal) and a strategic level, something I’ve usually glossed over in the past.

7) Don’t do too many scenarios. Like the first black belt test, only the first scenario really shows you what the adrenaline will do. If you put someone through four or five, the last few are run like a game. The novelty wears off. A peer jury helps a lot. Having friends who you have to convince that you did the right thing puts some social pressure (and the attendant neurohormone cascade) on the student. But it still turns into a game. My ideal rhythm is one scenario in the morning probing for weaknesses and a scenario targeted at those weaknesses in the afternoon.

8) Knowing it is a scenario makes people do unnatural things. Confronted by a Monkey Dancer in a bar, leaving is sensible. People leave in a scenario who don’t leave in real life (and people step in who wouldn’t in real life). That is stuff for the debrief.

Above all, be safe and learn stuff.