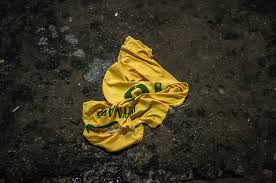 Well unless you live under a rock, off the grid in some remote wilderness you will have heard that Germany beat Brazil 7 -1 in the first semi final of the 2014 FIFA Cup. Now I admit to not seeing this game, I went out cycling as part of my training regime then on return a nice walk through the woods with my wife and a call into the Rising Sun for a pint of Daily Bread, (Best Bitter, and very nice it was too), before we returned home and remained oblivious of this cataclysmic event in world cup, neigh the history of football itself.

However, there was no escaping it this morning, not since England beat Germany 5 – 1 in Munich has there been such excitement on the airwaves and in the press in the UK. Nobody expected a result like this, for many Brazil were the nailed on favourites to win in their home country, yes the Germans are good, but surely not good enough to beat Brazil in Brazil.
Well it just goes to show that despite the finest training, home advantage and an array of glittering stars it can still all go pear shaped. I for one have hardly watched a kick of this world cup, fed up of overpriced wimp players, when they are not biting one another, falling over at the slightest contact as though they have been the victim of an IED, FIFA corruption and England appointing a useless manager with no ambition but a big book of excuses, (end of mini rant).

Yesterday a martial artist of many years renown asked on facebook, “HOW COME – To be able to defend yourself you need to learn the martial arts to a high level for many years. But how come the nasty villains don’t need to learn any martial art to be dangerous?”

Well because of all the fluff, all the stuff we never use, all the hocus pocus, and in some cases downright dangerous nonsense, that instructors fluff up their systems with to make it look uber cool, if functionally useless. Martial Arts are full of Chindogu.
Suitably Chindogu is a word for all those useless things we might be tempted to buy, windscreen wipers for your spectacles, programmes on your washing machine you never use, software on your computer/phone you will never use. We buy it because we are told we need it and it is useless. Just like much of what we pack our martial arts classes with. So when we come up against a determined, untrained opponent in a situation far removed from the comfort of the dojo you will end up thrashed like the Brazilians last night. Waking up bereft and stunned wondering how that happened after all those years on the mat in your gi.
Let me give you a tip, start stripping out your Chindogu now before somebody single minded and efficient does it for you, prevention is better than cure