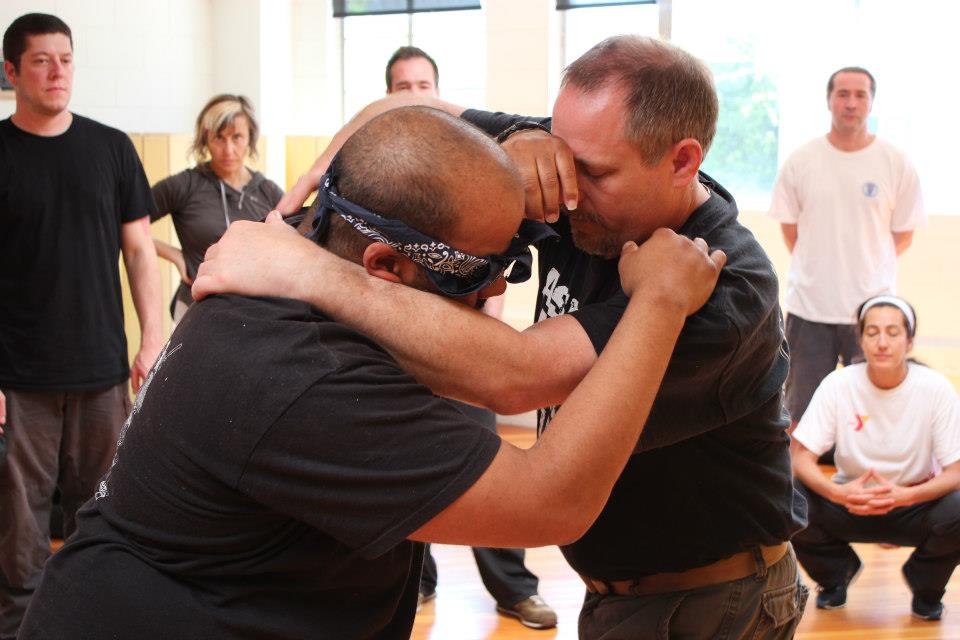 Largely this will be a draft of an article for Conflict Manager Online Magazine. I’ve been doing a four part series there, the last three are the steps towards application (deriving your principles, a touch of adult learning theory, stuff like that.)

So, background– You have to know your principles, understand them. And you have to have a clear idea of what you are actually teaching (most common mistake, people equate fighting with self-defense.) Your ability to pass on knowledge is absolutely limited by the clarity of your understanding of that knowledge. And what follows is a process, but you must know how to teach and how to communicate separately from this process. For instance, criticism is rarely effective teaching.

On a psychological and emotional level, you have to prep people for learning. One of the most toxic things we have done in martial arts and in some of the reality-based systems is to make conflict special. People come to us convinced violence is alien to them, it is complicated, it is hard to learn. Emphasize that this is natural. The physics are the same as any other physical activity and the mentality is part of their evolutionary heritage. It’s been hammered and brainwashed out of them, but they are all natural fighters, all survivors.

I like having an over-all game that skills will always tie back to. The game has to be well designed. Minimal bad habits (if people don’t go to the hospital, there are safety flaws built in. If they do go to the hospital, they don’t learn anything while recovering.) It must be what it is and no more (I never call the one-step a fight simulation. It is a geometry problem made out of meat, and your job is to solve the moving meat problem as efficiently as possible.)

I like the game to have a competitive element to it, but no winner or loser– you are going to strive to be more efficient than me, but if you excel at that, you haven’t beaten me, just given me a more challenging problem to solve. The problem with full active resistance or any form of direct sparring is that the only the winner learns that “it works against a resisting opponent.” The loser, who probably needs the skill more anyway, learns that it fails against resisting opponents. Failure is not a lesson you want to teach. Not at this stage. This is the play stage where you are familiarizing with principles and what you can do, and looking to increase efficiency.

I start with the one-step. That’s the slow motion, taking turns, efficiency exercise described in Drills: Training for Sudden Violence, (That’s Smashwords. Link to Amazon Kindle.) Next level up is to blend that into a faster flow drill. Flow helps to lock in the skills, but as you go faster the students will miss opportunities.  And that’s always the balance– you need speed to handle speed, and you need to practice speed to not be overwhelmed. But that always comes at the price of: 1) missing opportunities and slowing down learning. 2) The safety flaws become more important. A slow elbow to the head you can make contact, a fast one you have to pull. 3) The faster you go, the harder the training ingrains, good or bad. Including the safety flaws.

The third level is full blown infighting randori. Your students need supreme control and confidence to do this well and safely, and frequently, this one has a winner. It integrates skills better than anything I know, because it is too close and too fast to process cognitively.

So those are the games I tie back to. We play the game, the one-step first. Before any instruction whatsoever (they get an extensive safety brief and a demo) they play. The only criticism at that point will be for safety and staying within the rules. Like any other game, they have to learn the rules. Most important is time framing. It’s a slow motion drill, so it is easy to get competitive and speed up to “win”.

Because they can do this successfully, it helps convince the student this is not special or alien. Gets them over that first big hurdle.

Next stage, you need to know your principles inside out. Then come up with ways to demonstrate them. Not techniques to remember, but sensations to feel.

Tie it back to personal experience “structure is just like pushing a car” but remind them it can always be more efficient. Or: when you do a squat, are you ever on your toes? Of course not. And you don’t sprint from your heels. So heels down for power, heels up for speed.

Basically, students may not have been consciously aware of their own bodies, but the body mechanics of physical altercations are the same body mechanics they have used every day.

Design or find a specific game that works a specific principle. Sumo is awesome for learning about the interplay between using structure and exploiting momentum.

Or demonstrate the common traits of a class of technique. I show one aspect of leverage by pointing out the different high-mechanical-advantage leverage points on the body and have the students experiment with them. The experimentation is key. And this is one of the places, where, as an instructor, you have to be careful. A lot of martial artists have been damaged by their previous instruction. These are the one who are always asking if they did it ‘right’ or which finger to use or how to grip. They are so used to being corrected that they are more concerned with the instructors criticism than success or failure they can feel. You have to deflect this by asking the only question that matters: “Did it work?”

Then bring bring them back to the general game, so the new stuff start to work with everything else. They shouldn’t obsess on the new skill (e.g. only trying for leverage points) but the new skill will be fresh in their minds, and will come out a lot.

Repeat the cycle. Break them out of the game to work on something else, like targeting. Then put them back in the game.

Theoretically, you could, after each skill, increase the speed. When they are starting to do it reflexively, pick up the speed to the flow level. Finally lock it in with a contest-level fast and hard game (infighting randori.

I don’t do it that way. They can work on the principles in one-step forever. I move them to flow and randori based on their abilities and confidence level. Animals learn through play and the first exposure to randori should be fun and slightly overwhelming but shouldn’t make them feel terrified and helpless.

The last, critical piece to self-defense is to occasionally run good scenario training. That allows them to use their skills in tandem with their judgment. And use more force, because of the armor. That said, scenario training is very hard to do well and safely and easy to do poorly. And poor scenario training can mess up students, physically, tactically and emotionally. It is better to stay away from the completely than to do them poorly. Last CCA for this post: I’ll be running scenario training (and other things) in Rhode Island next month. Information is here:  http://chirontraining.com/Site/Sept_in_New_England.html

Not a single technique anywhere in that progression.

There are some caveats, though:

1) Done properly, it allows and encourages creativity. Which means your students will innovate some sneaky shit and beat you far sooner than if they train in techniques. This is not a good method for egotistical instructors.

2) It can be hard to measure and test. Using this platform for jointlocks, we’ve gotten untrained officers improvising locks under pressure in an hour. And some of those locks would seem to be advanced. But they wouldn’t have been able to name a lock or to demo a specific lock. Which makes organizations and concrete thinkers get the twitches.

3) It’s incompatible with most martial arts business models. The student/teacher relationship will shift to colleague/colleague very quickly. I like that, personally.