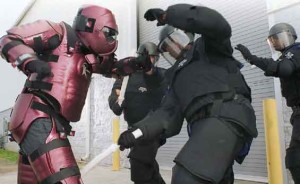 Just trying to clear up some language here.

The first I call “situationals.” These are the short ‘what if’ questions. What if you’re attacked at a urinal? How do you fight out of a crowd? Someone jumps you on the stairs, what do you do? They can be fun training, and intense. But intensity is something the instructor always has to worry about. Not because of danger (though brawling on stairs has obvious safety issues). Because anything that feels intense, any training that gives the student some adrenaline, will feel more real to the student than other forms of training. And if the situation or the solution has artificiality–and it will– the student will still learn the lessons hard even if the lessons are wrong.

The value in situationals, if you are careful, is that it allows you to work some stuff out. To find some tools (like shoulder slams using the handrail on the stairs). The problem is that they will always be pieces. I firmly believe that most bear hug escapes come from this kind of brainstorming, and they fail miserably because the people envisioning the escapes somehow missed that bear hugs almost never come into play to immobilize, but to throw people into things and any escape must work with your feet in the air.

They are also a hotbed for stylistic inbreeding. Inbreeding– you have a good technique so I come up with a counter so you modify your technique so the counter doesn’t work so I come up with a modified counter so it does work so you modify your techniqueagain… in two or three iterations of this we are using techniques that don’t exist outside our inbred little training hall and have counters that apply nowhere in the real world.

In situationals, you have to be sure that the people giving the problem (uke) are acting natural, not adapting to the solution. The best tactic I’ve found for fighting out of groups, for instance, is not to fight. It’s a wedge and swimming motion that gets you out of the circle or through the mass quickly with relatively little damage. But it predicates either on a group trying to put the boot to you or a panicked crowd. When the group starts to prioritize immobilizing first, the swim is neutralized… but, with the exception of one team prison shanking, I haven’t seen that in the wild.

The second type of scenario training I learned as “The Sharpness Exercise” (translated). Hogan’s Alley, basically. You give the operator or team a reason to run a maze– officer down at the end, 911 call from a kid hiding from intruders somewhere in the house… different things for different agencies in different parts of the world. As they run the maze, they will be presented with problems– booby traps, ambushes, different threats requiring different levels of response, and innocent people as well.

Done well, Sharpness is a great exercise for adapting on the fly, for using your whole range of force options, and for practicing judgement and articulation. It takes a little more equipment and prep than situationals, but a lot less than full blown scenarios.

I’ve seen this exercise go very badly when the instructor was trying to make a point about how dangerous the world was. Everything was booby-trapped, every hostage you rescued was actually a bad guy with a concealed gun, the other guy in uniform was an imposter and assassin… I played  for one of these at the academy years ago when I was young and stupid and couldn’t tell intense training from good training. That Hogan’s Alley made the officers so paranoid that they were useless on the job until after they got over it.

Full-blown scenario training is difficult and expensive. It requires armor. It requires an environment, either a real place or a modular training space. You want simunitions if you’re teaching professionals. An absolute minimum of a three-man team (Facilitator, Safety Officer and at least one Role Player). The safety protocols must be detailed and must be enforced. It’s not easy to do, even harder to do well.

On the plus side, scenarios are ideal for practicing judgment in tandem with skills. They allow you to test and work everything from tactics to emotional growth. They find holes and glitches like no other training. There’s a big chapter on them in the Drills manual.

On the downside, they are very difficult to do well and safely. Safety runs from the hazards of a nearly full-contact fight (armor helps, but it’s not perfect) to the environment (anything from rusty nails to a gaping hole where a staircase used to be) to pure negligence (about once a year someone gets lazy or complacent on the safety protocols and a live weapon shows up in a scenario.)

And, if the scenario designer, Role Player or Facilitator are ignorant or ego-driven, scenarios can ruin a student. If the training team decides to “be tricky” or “be challenging” that means “be artificial” and they will teach untruth and, under the adrenaline of a scenario ingrain that untruth hard. If they don’t understand criminals, the student can’t learn what works and what doesn’t, only what works or doesn’t when dealing with poor actors. If the RP or Facilitator need to win, to prove that they are better or tougher or more tactically sound than the student, they will, consciously or not, punish the student for any solution that is better than the one they envisioned.