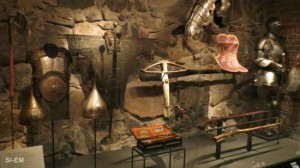 In fact it is not really a digression as such as this article is about home defence, from my perspective. As I welcome you to Smith Towers at our front door, I have within reach a range of weapons beyond the lethal weapon that is my body! I know the law as it applies in England to the use of weapons in all its interpretative complexity, well at least as far as one can know it (my wife is a criminal lawyer after all and I have an interesting past). I know for instance that all of my weapons are legal to possess in my own home, I understand that they immediately become offensive weapons if taken out into public, or even on or in my property are used in such a way as to cause fear and distress to members of the public.

So I have weapons, big deal, actual intended to be weapons weapons, not even including all the potential adapted objects that could serve effectively as weapons. I mean sticks and knives, billhook, pick axe handle, walking stick, machete, and cricket bat (even though like 10cc I don’t like cricket) and an air rifle. I list the last although it would have limited use it is unambiguously a weapon that lives in the wardrobe.

The knife is a Fairbairn Sykes Fighting Knife, not a Swiss Army Knife although I have these too, it has little other purpose to exist other than to kill or perhaps seriously disable, if you do not do it right. My wife bought me this as a Christmas present a few years ago. Do I intend to use it on anybody, an intruder perhaps? No, not really, I do not have some sick desire to stab anyone, I can project my thoughts to the aftermath of all that would flow as a consequence and I am not talking about the blood. I have been caught silently (almost) making my way up the stairs to the top floor Fairbairn Sykes in hand, having heard a clear footstep, it was daylight, it was my daughter who had come home whilst I was in the garden and had not heard her.

I was not enacting a fantasy, I thought there was an intruder, any unknown intruder could present any kind of threat, and one brave enough to come in the daytime, by my calculation, poses a serious threat. I could have tip toed up there empty handed, yes I have Dan grades on my black belt, yes I have had real fights and won, yes I know the consequences of using the knife, but let me tell you, if I think there is an intruder then I will do whatever necessary to tip the balance in my favour. Hence the trusty Fairbairn Sykes.

So it was a false alarm, nothing happened; my daughter looked over the stair rail and asked me “what are you doing dad?” So brief explanation delivered we went and had a cuppa. Nothing like a cup of tea. The thing is I was alerted to possible danger but definitely not adrenalised, at all. It was a footstep, real as it turns out, but my ‘training’ kicked in and all turned out well.

Here I want to refer to the seven stages of self defence as outlined by Rory Miller starting with the ethical question, are you prepared to use violence? In this case in the defence of my home, family and possessions including the use of weapons. The simple answer from me is yes, where violence is the most appropriate tool. Have I used violence to resolve problems before? Yes, where it was the most appropriate tool. Have I used weapons in violence before? Yes, where it was appropriate. Can I morally condone the use of violence in defence of mine and my home? Undoubtedly.

Does this mean that using violence, including the use of weapons is acceptable, well that is both a legal and moral question that each individual must answer themselves. As Rory says in ‘Facing Violence’ and Marc MacYoung has made clear for years, best think about this before the main event arrives on your doorstep. This is not the same as planning to use violence, it is about coming to terms with the fact it is an option in some circumstances the only one. It is a way of giving yourself permission to act if and when the circumstances dictate. It also includes weighing up the pros and cons and being aware of the down side if you get things wrong. As Marc shows in ‘In The Name of Self Defense’, the costs can be high.

Well by simply possessing the weapons I do it is clear that I have come to terms with using them, principally as a deterrent but in the last instance as an item with which I defend myself. No last minute scramble to find something that might work with all the possible dangers that incurs, instead access to strategically placed weapons appropriate to their environment. I understand all the dangers of selecting the wrong weapon, using it without cause or reason and hope, should the situation arise that I do not make a mistake that would lead this to happen However, in the event of home invasion or an unwanted intruder, lacking a crystal ball that helps me read their intentions, I will draw my weapon and I will defend my home. Detaining them if possible, letting them escape if necessary, it is not an ego thing. As long as my family are not endangered or hurt both these are on the table. Engagement is a last resort.

If engagement is necessary then using weapons is totally acceptable and non-lethal force the priority. This, however, depends on the threat faced and as the law states, and I believe, reasonable force must apply unless the potential threat is lethal, then the stakes got raised for you and yes, preparing for this is part of that ethical and moral decision each person must take.

This prior thinking is also key, in my opinion, for dealing with part of the aftermath. Using force successfully on another may bring elation and regret in different shares. There are a number of things that will need to be dealt with in the aftermath of defending your home depending on what happened, with whom, where etc. The variables are virtually infinite and I am staying broad brush not detail, but aftermath there will be. Hiding a body or bodies is the stuff of films and novels, leave it there. Let’s hope there is not a body, especially not yours. But that is on the cards if violence is the solution whether or not weapons are applied. The stakes go up if they are though, they go higher if different weapons are applied, especially ones with sharp edges and points. This being the UK (firearms are not part of the options for the vast majority).

The aftermath lasts a very long time, do not underestimate this, if you do you do so at your peril. If you set your level of response below the use of weapons that is your ethical and moral choice, I do not criticize. You have your position, I have mine. I have thought this through fully; I have also made sure I have good security on my property including internal locks that shut off the lower floor rear of the house, exterior lighting etc. I make my house a hard target, do you? Take a look to see how you would break in if locked out, check out how professional housebreakers get in, and then review your defences.