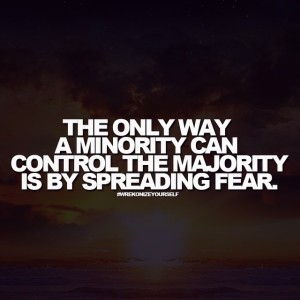 It’s a frightening thought. Your friend on Facebook encourages terrorism. But before discussing the indicators of someone who aids terrorists, a little background is required.

A basic interpretation is that terrorism is intended to intimidate civilians and coerce government. Terrorism works by creating fear. It is this fear that influences the actions of the population. Terrorism works not through the overall use of force, but by the fear of incidents of force.

Terrorism is used by individuals and groups that DO NOT possess the power to force their will upon a population. Therefore, terrorists resort to intimidating the population through the use of high profile acts that are designed induce fear into the population. A fearful population will act in predictable ways that benefit the goals of the terrorists. Terrorist thrive not only on building fear, but also on creating fear based hate. The terrorist “wins” by destroying the well-being of the population through replacing feelings of trust and security with feelings of distrust and insecurity.

For example, if a single unarmed terrorist wants people to not view a certain controversial film, he doesn’t have the physical force to do so. But, by yelling “I have a bomb” during a showing, he creates the panic which drives people out of the theater. He also creates the subsequent fear that discourages people from going to future screenings. Despite the fact that the movie goers have the physical force to subdue the terrorist, call security, and continue watching the film, they are effectively controlled by the fear the terrorist created. [ Thought experiment: What would likely happen if someone tried this tactic at screening for prisoners in a maximum security facility?]

Here are five signs of a Facebook Supporter of Terrorism. He or she posts and/or shares material, such as memes, articles, commentary, videos, etc.