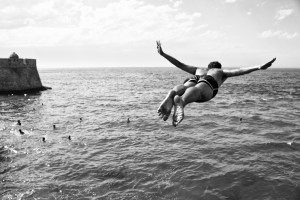 Abandon
I like the word “abandon” and it has been coming up a lot, lately. There are three (at least) instincts when faced with chaos and danger. The most common is to try to control it. To minimize the chaos, to minimize the danger. To basically take chaos and and make it “not chaos.” Whatever the opposite of chaos is.

When you can do that, it’s a powerful strategy. Damming flood-prone rivers has been so successful that only historians have a grasp on the immense damage that unpredictable flood cycles used to do. An aircraft carrier constructed of 60,000 tons of steel and powered with nuclear engines can ignore all but the most extreme weather conditions.

I would say that is the second most common strategy. Evidently, people prefer even an evil stability to all of the possibilities that come with freedom. But that’s a long talk over coffee.

The most common strategy is to pretend to control it. You can, with enough resources, control things you understand. Without an understanding, and a fairly deep understanding, all attempts to control become a gamble. Most common example is central planning of an economy. The planners would have to deeply understand a huge number of industries, the interplay between those industries, and somehow have to correct for the fact that a large number of humans, the cleverest monkeys ever, will be actively trying to subvert the system. This is what Nassim Nicholas Taleb calls “Naive interventionism.” “Something must be done! We don’t understand the problem, actually, and have no idea if what we are going to do will actually work or make things worse… but something must be done!”

On the micro, we have martial arts. Which are largely a stylized, impressionistic, ritual of violence and controlling violence. “When you achieve your black belt, you will be ready.” Ready for what? You can’t know the answer to that simple question– no one gets to know what bad stuff the future holds. If you can’t know the question, you should be incapable of feeling confident in your answer. But people feel confident all the time.

Like economics, violence and self defense always involve other people, and people are the cleverest monkeys on the planet. It’s not just mechanics, but mechanics applied against a moving target who may understand what is going on better than you and certainly wants you to fail. And each of those people will be different in some way.

The third strategy is to give yourself up to the chaos. Abandon. To immerse yourself in it. Not become part of it, but recognize that you have always been part of it. You have always been one of these adaptable, clever, frequently unpredictable monkeys. This (whatever ‘this’ is in a given context) can be chaotic, but not beyond what the human brain and body evolved to solve.

It’s scary– humans prefer even an evil stability to chaos. But it is also powerful. And it works. It takes confidence, but also builds confidence. And there’s no way to learn it theoretically. You have to get in and mix it up. Take chances. Push the edge of the envelope until the envelope changes shape.

It also requires faith. Not in the religious sense. Dangerous stuff is dangerous precisely because you can get hurt. Chaotic means that you can’t know the outcome. And jumping into that with both feet pretty much defines faith. Or stupidity. No one gets good at this stuff because of their overabundance of common sense.

To sum up:
The first strategy–Control the chaos:
To an intermediate grappler, a beginning grappler is completely under your control. You just make him do what you want him to do.

The second strategy– Pretend to Control the chaos:
“We train not to go the ground in our dojo. If you’re facing a grappler, all you have to do is…” says the man who has never grappled.

The third strategy: Abandon
The superior grappler doesn’t bother to control the intermediate grappler, because everything is a gift.