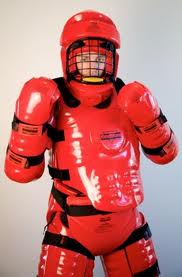 He is big. He is loud. He is scary. He starts yelling at you from twenty feet away. You tell him to “BACK OFF!!!” He walks straight up to you. He stands directly in front of you and reaches to grab you. You punch him in the groin. As he crumples from the pain, you strike him in his enormous head. He falls to the ground unconscious. Welcome to the world of Adaptive Fantasy Fighting.

Before I go any further, there is value to this type of Fantasy Fighting. It allows you to bring up your aggression level, to learn to be vocal and assertive, to experience the effects of adreneline, to strike something as hard as you can. It increases your self-confidence and the conviction that you can “handle” an attacker. And as long as you never actually encounter a motivated attacker, it is all good.

But if you do, you will find out that real assaults have nothing in common with Fantasy Fighting.

Real attackers don’t begin by threatening wheelchair users from 20 feet away. They don’t need to. They don’t make it so obvious that they have “bad intention”, thus giving you time to vocalize from a safe distance. They walk right up to you, or they come after you from behind, or from the side. In any case, they attack with the most obvious and natural attack. They push, pull, or punch you out of your wheelchair.

They don’t grab you and just stand there in front of you. They want you out of your wheelchair so they can either stomp on your head, or kick you in the kidneys and ribs, or sit on your chest so they can either pound you senseless or smash your head into the pavement. What this means is that the attacker doesn’t stop moving, pressuring, and attacking you until he achieves his immediate goal of knocking you out of your wheelchair because that is the thing he set out to do.

As wheelchair users, we know how easily we fall out our wheelchairs. We fall over backwards when we inadvertently lean back too far, when dancing with an overly enthusiastic dance partner, when carrying too heavy of a backpack, etc. We fall forwards when our front wheels sink into soft terrain, when we hit a large crack in the sidewalk, when we try to pick up something too heavy in front of us. We fall over sideways when going across a side slope and we reach down the hill. Now let’s imagine that some aggressive motivated person wants to make us fall. The reality is that it will happen despite our best efforts to prevent it.

Yes. But what about that devastating strike to the groin? The problem with this “counter-attack” is that it is launched from your aggressor’s “Kill-Zone”, the place where he has maximum power and advantage. The place where he can tee off on your head with an overwhelming downward blow, or blast you over backwards with a strong push to your chest or shoulders. Because of his height, superior base, and lower body mechanics, his Kill-Zone is much more powerful than your Kill-Zone. It is the same as fighting against a flame thrower with a blow torch. You think you and your blow torch are tough stuff until you meet the man with the flame thrower.

As a practical matter what this means is that you must not allow yourself to be caught in the Kill-Zone. You need to either pre-emptively warn your aggressor to stay out of the Kill-Zone, explosively push/strike your aggressor out of the Kill-Zone before his attack, or be prepared to be taken to the ground fast and hard. A significant problem with Adaptive Fantasy Fight Training is that the majority of techniques are designed to be executed while in your aggressor’s Kill-Zone. And you are effectively lucky enough to be “fighting” an unmotivated aggressor who forgot to bring his flame thrower. So, naturally you win. If that was indeed the case, then yelling at him to “Back the F-Off!!” would likely be all you need to ward him or her off anyway.

When you fight the padded man, your natural response is to punch with a closed tight fist. It “feels” the most effective. Without the power generated from the lower body and core, open handed strikes feel weak and ineffective. The problem is that when punching a real skull, closed fist punching will likely get you a broken hand. It is slow and requires chambering. And without Hollywood style acting, punching is weak and ineffective without use of the lower body and core.

If you are attempting to fight off a physically more powerful attacker, you must rip, tear, bite, break, gouge, choke, and whip him in sensitive areas and break joints with explosive unpredictable speed and viciousness while simultaneously warding off his attack while likely doing this from the ground. Fight training in your wheelchair against an impotent over-dramatic padded man with no real anatomy does not allow you to do this and is merely an adaptive version of Fantasy Fighting.