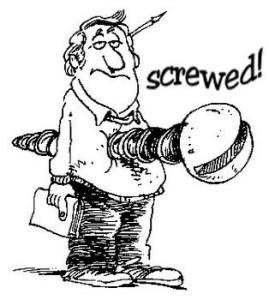 Every time I hear this kind of thinking. I have a strong urge to throw up.

I ought to buy stock in Tums. Get some of the money back I’ve invested by needing to have a bottle of the stuff constantly on hand. Because I’ll tell you, I hear this nonsense a lot.

I don’t hold the people who are asking me these questions responsible for my indigestion. (The ones talking about ‘real’ violence are another story.) The questioners honestly don’t know any better. I’ve started explaining to them most of what they think they know about self-defense, violence and fighting is advertising.

To be more specific, it is information tailored to fit with what they think they know about violence — based on Hollywood images, high school memories and their own fertile imaginations – package up and sold to them as ‘self-defense.’ While that statement is accurate, it a really complicated way of saying ‘They’re selling you fantasy solutions to fantasy problems.’

That’s where one-stop-shopping starts creeping in. Keep this in mind, we’ll come back to it. Right now I want to talk about tool development. In doing so I hope I’ll help you see things a little clearer about why ‘self-defense’ isn’t a one-stop-shopping kind of problem.

Someone recently sent me a couple of Youtube links to a ‘master’ of ‘combat tai chi.’ (Well, there’s some marketing right there.) He asked me what I thought. Here’s my reply…

From a tai chi movement standpoint, he moves like a pregnant yak.

For a Hollywood action flick, he moves perfectly. His movement is slow, gross, choppy and stopping mid-action. Which makes it so the camera can see what he’s doing. The movement looks dramatic and cool for the camera. This so the viewer can track it (especially because of the pauses).

For an advertisement selling his videos to people who don’t know what violence/ fighting actually is, his gross movement is awesome, cool, kick ass and “wowie kazowie let me run right out and put my money down for training and videos.”

Knowing this is important because a good tai chi player can nail you so hard that even Google won’t be able to find you. It will have power based on structure and VERY subtle movement. Movement that, not only the camera won’t see (look across the room and squint, that’s what the camera sees), but also not visible to the untrained naked eye.

Yeah you see tai chi guy stick his arm out, but the reason the other guy gets knocked on his butt is because of the subtle body movement the tai chi player does. The arm is more the delivery system.

And it ain’t just ‘hits’ there’s all kinds of weird angling and twisting that go into it so as to create serious ‘this sucks’ physics. Well, it sucks if you’re on the receiving end of it. In all honesty, as much as boxers know how to hit hard, I’d rather take a punch from a boxer than a blow from someone who knows how to apply his/her tai chi on the proper angles. It’s either get knocked on your butt or have things break — and if the tai chi guy is good, you get both. A boxer can knock you across the room, a tai chi player can nail you into the ground. Lemme tell you, the human body is not designed to be used as a nail.

Now let me address another issue. Despite having awesome physics, Tai chi won’t teach you how to fight or how to defend yourself.

I’m going to use a weird analogy here. Let’s liken self-defense to fixing your car. Tai chi is like a tool box. It’s filled with some damned fine quality tools. But, just having the tools won’t teach you how to fix your car. You also have to know how to use them. Oh, while we’re at it, when it comes to fixing your car, you have to read the manual on how to do that too.

Except there’s a problem, you don’t know how to read. Without that knowledge, that manual is pretty useless. Being able to read helps with determining if this the right manual in the first place. And oh yeah, just reading the manual won’t get your car fixed either, you actually have to pick up your tools and do it yourself — after you’ve correctly diagnosed the problem. Even if you have the tools, changing the tires isn’t going to help you replace a broken fan belt. That’s why good diagnostic skills are also important.

Is having the tools critical for fixing your car? You betcha. But having tools is only one of the many critical elements you need to have in order to get the job done.

Now, I can’t speak for ‘Master’ Who-Flung-Poo’s instructional videos. The things you talk about him mentioning are, are in fact, very important for proper tool development. But remember having good tools while very important, is not the same as knowing how to use them. Much less knowing how to fix your car.

Conversely, knowing how to fix your car is equally useless without tools or having tools that break on you as you’re trying to use them (hence the need for good tools).

Tai chi can give you really good tools and teach you how to use them. However, the way that it’s normally taught tends to be more oriented on different directions (e.g. building a house). Self-defense is a very specific set of needs and knowledge. While a lot of tools cross over, there are somethings that are very specialized and unique to that subject. Things you will not learn from the martial arts. (Like, oh say, the legal definition and boundaries of what self-defense is).

For the record, let me state that it’s been my experience that tai chi is awesome tool development. They are really good about structure and power transfer. We’re talking the Snap-On Tools of the martial arts. And doing tai chi can take whatever style you do already and turn your tools into Dewalt, Craftsman and Milwaukee. In the same way that boxing will improve your punching skills and muay Thai will improve your kicking skills. That’s because you take what you learn there and apply it to your own style. (Different styles emphasize different elements and concepts. Those elements are what make that style effective. It’s not the style itself.)

A big, big problem with a whole lot of what is being taught out there is their physics suck. (Many commercialized schools have even lost the elements and concepts that made the style effective.) The body mechanics of the techniques (tools) they’re teaching are aweful. I’m not talking about even Walmart quality tools. I’m talking the cheap crap you pick up at a swap meet or out of the back of a van. Tools that not only don’t effectively deliver force, but break and fall apart as you try to use them. This is a big reason why I like to tell folks to do tai chi for a spell. It’ll improve the quality of their tools (techniques).

But again, ALL of those are tools. Tools critical to getting the job done, but not the same as doing the job. Or even knowing what’s involved in the job or how to do it.

Now that you have an idea about the bigger picture (tools, manuals, diagnostics, reading etc.) let’s take an another look at one-stop-shopping.

My problem with the ‘one stop shopping’ approach is people believe that they can buy quality tools, lean how to use them, learn to read, get the right manual and fix their car –ALL in the same place. Then they start adding things, like exercise, a social network, meditation, spirituality, character development and psychology and the BS gets really, really deep.

In closing I’d like to leave you with something that I’ll let you figure out the implications for yourself. That is the correlation between one-stop-shopping and high prices.

Take a look at the quality of merchandise you get from SuperWalmart, Super Target or whatever cheap one-stop-shopping store that’s local to you. You pay less knowing it’s cheap, but the convenience of not having to run around town balances it out. The martial arts, combatives, ultimate fighting market is the polar opposite. The more they claim to be able to ‘give’ you everything you need, the higher the prices.

But what about the quality?

For all the money these places are charging, I am seriously underwhelmned. Never mind all the other stuff they say you are ‘learning.’ Way too often I look at the quality of their ‘tools’ and think ‘You need six months of tai chi. Because your structure and timing sucks. You’re leaking force like a spaghetti strainer.’

But man, will the instructors – and more importantly the people who are paying for it — tell you how awesome and effective that training is.

Apparently, the more people pay, the more they believe (or maybe that’s ‘have to believe’) they’ve found the ultimate kick ass style that gives them everything they need to prepare them for ‘real’ violence.

You might want to think about this if you’ll ever have to ‘fix your car.’