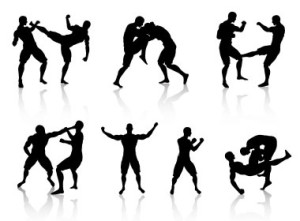 Aaaaand someone just asked me why Asian MA are so flowery and full of mystic, warrior BS … while Western stuff is so much more ‘real’

You do of course realize you are talking about westernized, Asian martial arts don’t you?

Like you might as well be saying “Why is Mexican food not that good” when you’re talking about Taco Bell.

What you have ‘tasted’ is a watered down, commercialized, made for white people’s tastes, simplistic version of something much, larger and more complex. And that’s on one hand.

More than that, the guy who interjected all the woo-woo shit was an actor. An actor that one magazine promoted as the ultimate martial artist for decades after his death. Yet the readers and fans ate it up. Every time they put him on the cover, sales skyrocketed. An actor who was a drama major in University Washington, but has been claimed to be a philosophy, history, phys-ed and psychology major by the “Cult of Bruce.” I’ve studied religion, theology and philosophy — both Eastern and Western. And Bruce Lee’s babbling about the subject is about as deep as a puddle in a parking lot. But to a whitebread world, he seems deep and mystic — especially when he’s applying it to martial arts.

Flip side of that coin, I have two grandmasters in my lineage that threw Lee out for being an asshole. And a sifu (whose busted up face tells about his street fights experience) who was a childhood friend of Lee’s. He told a different story about Lee’s ‘legend’ as a streetfighter in Hong Kong. Yet Lee’s fame in the West is so great that he is thought of a the great mystic warrior and these guys –who did a lot more live fire shit (including surviving wars)– are unknown.

Which tells you a lot about the nature of fame in the West. It also tells you about some people’s need to feel special. Not to be special, but feel special. See it’s really cool to be a mystic warrior and follower of some obscure spiritual path from a far away place. That way none of the locals can say ‘you’re full of shit’ (because they don’t know the real enchilada). While people from that background (who do know the real thing) are too far away to take a look at you and say ‘WTF are you talking about? That’s not what that means” (or that’s not how it’s done).  Basicially you can say any mystic sounding or make pronouncements about ancient warrior traditions you want and nobody will call you on it.

Oh yeah, and something else that was common both back in the day  here and back in Asia, if you bragged about what a bad ass you were, someone would call you out to prove it. Not in the ring, in back alleys. Or even right there in your own school. (That was called dojo busting.) Now days, it’s marketing. The “Hey look at me” that is so endemic in martial arts in the US has seriously grown out of proportion ever since people quit having to back it up — and this includes in the MMA. Hell, being willing to step into a padded ring with gloves, rules and doctors nearby is televised “look at how tough I am.” And it’s great marketing for your school when you retire from the ring.

Moving on to something else. The original source of the Asian martial arts here in the West was service men returning from deployment there. For a long time it was a big thing to have studied overseas. Two problems. One is the ‘Do you think they really taught everything to round eyes?” To this day there’s a degree of animosity about having US service men in your country.

Two, how long is a standard military deployment overseas?  If you’re answer isn’t ‘one year’ then you’re wrong. You get a boatload of guys who went over there, studied for a year, and on the return trip … well, let’s just say this. Know the international date line? Bet you didn’t know it’s also an international master line as well. On the return trip that solider suddenly becomes a black belt. That immigrant, who knew a little MA, suddenly becomes a Grand Master.

And once again, the local yokels here in the States ate it up.

I have a friend who breaks the Japanese martial arts into three categories. Classic, traditional and commercialized. The classic stuff has great body mechanics and wide application in both fighting and survival. I’ve seen it and it fuckin’ works. I mean, if you try sports fighting stuff against them, they will hospitalize you. Not in an extended fight either. I’m talking they will break stuff as they piledriving your skull into the concrete. You’re either not going to get up from that stuff, or you’re going to need a ride to the ER.

Then you get ‘traditional.’ That’s where a lot of that bone snapping, skull shattering stuff was intentionally pulled out and replaced with the least effective way of attacking another human was emphasized — punching. Yeah, stop and think about it, if punching is all that effective then why do boxing and MMA matches last so long?

A punch by itself ain’t shit. The real injuries from a punch are usually because the guy loses his balance and hits his head. That applies to pretty much any kind of hit too.(If you watch the Ray Rice video, he didn’t knock her out, she hit her head on the elevator hand rail). The traditional martial arts pulled out the other stuff that makes kicks and punches effective and just left those. That reduced them to either sports or fighting. (Fighting equals two guys punching each other out to prove whose dick is bigger — NOT trying to kill each other.)

Then comes commercialized. That waters things down even more and the BS builds. The people teaching don’t have any idea what 3/4s of the stuff they’re doing in forms is for.  So they start dropping stuff they don’t understand and adding shit the saw in tournaments — or is the latest fad. When the BJJ craze hit, I  know of a Tae Kwon Do school that started teaching Yudo. Which his instructor had made him promise not to teach for 20 years. Wow who knew that Brazilian Jujitsu was invented in Korea? I walked into this guys office and catch him with a mail order BJJ video instruction kit still on his desk.

It’s especially in commercialized stuff you’ll find the mystic and warrior tradition and history of the Samurai or Sula Warriors horse crap. It’s mostly a cover for the fact that they can’t fight their way through a wet kleenex.

Now having said all this, let me point out that in their own way Western arts are just as screwed up. That’s the other hand…

See one thing they really suck at is self-defense. Come to think of it, they’re even worse a high levels of street violence and crime. Wanna know why? Because they are teaching you to fight. Better known as dick measuring. Self-defense has totally different goals, tactics and mindset. Trying to fight in a self-defense situation is likely to get you killed. More likely though, since — while self-defense is legal — fighting is illegal, overwhelmingly what you learn in a boxing or MMA school will get you arrested if you use it outside that sports context. Because it is sports fighting. And it doesn’t belong out in the streets.

For every story you can come up with about someone successfully defending themselves using their MMA or boxing. I can come up with twenty about arrests or getting injured in street violence. Since I teach cops, I can tell you five about a drunk MMAer getting Tasered.

In their own way people who practice Western styles are just as bad. Instead of being proud of their mystic and traditional ways (like Asian martial artist) they’re proud of what bad asses they are and how much smarter they are than those Asian arts guy because they keep it real.

Yeah… their macho fantasies are so much more real than those other guys’ woo-woo ones.