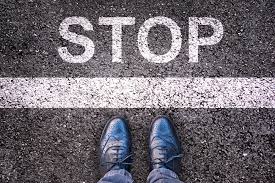 I’ve described boundary setting in both ConCom and Scaling Force, but I was recently informed that I haven’t written it down quite the way I teach it. So here goes.

Setting a boundary is not a negotiation or a conversation. It is a very different communication mode than most people ever use. This is why most people find it so hard, and why most people can safely ignore your boundaries. It is not enough to know the pattern, you have to practice. And the real practice is not in learning the pattern, it is in sticking to the pattern.

The pattern is simple:

The example in Scaling Force:

“I’ve told you to leave the door open when you come into my office.”

“What’s your problem? Are you afraid to be alone with me?”Trying to joke, trying to make the boundary setter defensive. Do you see the predator dynamic here?

“Open the door.” Simple, direct statement. No argument, no reasoning, nothing in the voice that could turn it into a question. One of the worst phrases is “I need you to do X for me” as it places all the power on the threat and sounds like a plea on two levels, “need” and “for me.” Do not use this tactic when dealing with potential predators. It’ll backfire.

“Whatever. I wanted to talk to you about…” Disregarding “no” or pretending to ignore boundaries is a huge red flag that you are dealing with a predator.

“Open the door.” Staying on message.

“Geeze, can’t you stay on the subject?” Again, trying to shift blame/responsibility, implying that the predator is the one who wants to get the job done and the potential victim is hung up on something minor.

“Open the door or I will file that complaint. Now!” The only thing added to the statement of boundaries is the penalty. “Now” acts as an ultimatum. Once you take this verbal step you must be ready to act on your threat. If the threat ignores you (some will, most won’t) and you fail to follow through, you will have marked yourself as easy meat.

It’s hard to stick with the pattern because we aren’t used to it. If you explain the reasons behind your boundary, it’s now a conversation, not boundary setting. The conversation may work, but what comes out is an agreement, not a boundary. Agreements require the consent of all involved parties. You set your boundaries around the things that are more important than other people’s consent.
Exception: You can make the reason (provided it is simple, not too personal, and doesn’t invite follow up questions) the introduction to step 1, e.g. “You’re too close. Back off.” NOT “Back off, you’re standing too close.” NOT “I had a really bad childhood and when people with beards get within arms reach of me I sometimes have panic attacks so back off.” You get the idea.

If you just keep repeating the boundary, it’s a broken record and meaningless. No one respects it. Empty noise.

If you skip the two middle steps, you aren’t setting a boundary. The first statement was a warning. It’s a different thing.

You can pretty accurately gauge the level of predation that you’re dealing with by how they challenge the boundary.

“Back off.” Most normal- and normal in this context means someone with no ill will towards you and no language barrier or mental issue that prevents them from grasping that this is a declarative statement– will back off. They might be bewildered or upset, and will probably ask for an explanation, but they will respect the boundary. You can explain a respected boundary if you choose to, just be aware that damn near everyone assumes that knowing the reasons gives them the right to break the rule.

Socially awkward/language barrier/mental illness/drugs may just blow by step one, but step two stops them.

Predators however have three common responses to step 1, “Back off” One is to open their body language, soften their voice and gently violate the boundary while asking you a question, “Honey, why do you want to be like that? You aren’t afraid of me, are you?” The second is to turn it back on you, try to trigger a common social guilt that makes you feel bad for setting your own boundaries, such as, “What, you got a problem with (ethnicity, gender, religion, any of the hot-button labels.)” Or, “You think you’re so special you can tell me what to do?” The third is to trigger a monkey dance by demanding the third step, “Oh, yeah? What are you gonna do about it?”

Step two tends to stop the low level predators as well. All of the common predatory responses to the first step are trying to divert you into a predictable social script. If you fall for them, it shows you can be manipulated and more important, those scripts are predictable. Ignoring the hook and going for the second step means you are hard to control and unpredictable. Most predators will give it a pass.

Real world notice #1: Sometimes, you’ll be setting boundaries say, at work, where there is a long term relationship. This guy might be a creep and you need to set boundaries, but you also have to work with him, maybe for years. Some of them will flirt with the edge of the boundary and try to turn it into a game to see if and when you will cave.

Some predators will push to step three, mostly to see if you have a step three or just go into broken record mode. Once you have stated the penalty, you have revealed that you do in fact have a plan to deliver consequences. Even the more serious predators back off here unless they are sure they can get away with it. And are willing to cross those lines. If the rapist knows he has to kill to keep you from reporting, he has to make a choice.

Real world notice #2. A lot of self-defense is taught as if the incident will happen in a sterile laboratory environment. The sexually aggressive creep at the office didn’t back off until step three. That’s pretty predatory. But he did back off, so win! Yay! But never forget that assholes are very good at punishing people for standing up to them, and this is a long game. The creep will tell everyone willing to listen how unreasonable you are and how petty and how you were going to write him up just for standing there… It’s a long game, but you can play a long game, too.