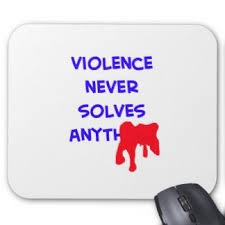 I use that as one of three foundations for my argument that “Violence never solved anything” is an extremist, unsupportable and demonstrably wrong contention. (The other is a punch line from a dirty joke.) ‘Never’ is an easy word to say, but it’s impossible to support the contention.

Here’s what people don’t realize; ‘Never’ is an absolute. Never encompasses not only every person who is now alive on this planet, but through out history. As such — using classic logic — if it is not 100% true everywhere, it is not true. Am I being mean? No. By using an absolute the person is setting these very standards. And yes, I have used violence to solve problems. So much for the absolutism of ‘never.’

“Oh well I didn’t actually mean never, I was just speaking rhetorically. What I really meant was…”.

(Keep this tactic in mind, because it’s useful for keeping “Johnny One-Notes” from dominating the conversation. Yes we know you’re an extremist who believes violence is ALWAYS bad, now we’d like to hear from some other people.)

The next foundation is the punchline that reads “We’ve already established that. Now we’re haggling over price.”

This is important because — although people have been conditioned to accept that ‘violence never solved anything’ — with just a few well crafted questions gets a supermajority of people to admit that, “Hey, I know that sometimes violence is the best answer.”

And THAT is where you can start having dialogue.

Should the standards of when we accept violence as an answer be high? Yes. Most people agree. Where is that line? Well that’s what we have to hash out.

This is a conversation you CANNOT have with the constant, repetitive screeching and squawking of “Violence never!” parrots.

Here’s the third thing that undermines the absolutist position. IF violence is categorically wrong, then it is wrong for EVERYBODY. There is no slack, no extenuating circumstances there is no excuse. In other words, if it’s horrible, it’s horrible no matter WHO is doing it. There is no ‘it’s not as bad’ because a certain person is doing it.

If violence is categorically bad then equality must be applied across the board. If not, then it is an injustice. If however, we accept that anybody can be violent, hateful and destructive and we have to figure out some standards about when/where/how it is considered appropriate — including self-defense or ‘fighting words.’

Unfortunately too many people have been conditioned to think along the lines of ‘violence never solved anything’. With a subclause of ‘women are only the victims of violence, and are never themselves violent.’