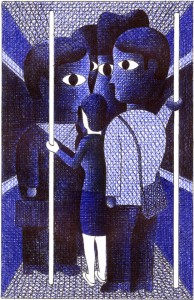 The previous story is worthwhile for commentary because it is a fairly common example that illustrates a number of important concepts.

What are some of the positive consequences?

The Trade-Off exists in everything we do, but most of the time we either don’t notice it, or have become accustomed to the associated negative so we disregard or accept the negative.

The 3rd concept is PROBABILITY. A major component of the Trade-Off is the associated chance of something positive or negative happening. Nothing is 100% certain. The goal is to make decisions (solve problems) based on educated probabilities of outcomes (solutions).

The 4th concept is DOMAIN. A domain is a place, an area, a society, a sociological group, where certain behaviors are commonly practiced, or follow certain patterns, or there are “rules”.

Getting back to the woman on the train. Those that are familiar with the DOMAIN of the subway in most western civilizations know the following:

1.       Men who grope women are counting on being able to violate their victims secretly.
2.       The offenders need to locate and target the “silent victims”.
3.       Secrecy depends upon the victim NOT responding in any type of assertive manner or drawing attention to her being violated.
4.       The offenders do NOT want confrontation because confrontation will draw attention to their actions.
5.       The offenders rarely engage in violence as part of their violation. Engaging in violence brings with it a high risk of both bystander involvement and institutional punishment.
6.       The offenders’ greatest tool for success is capitalizing upon their victims’ FEAR OF NEGATIVE CONSEQUENCES. The offenders are relying on their implicit ability to engage in violence even through the PROBABILITY of them engaging in violence is actually low.
The woman in the story was unfamiliar with the DOMAIN of the subway.  As a result, she decided not to respond because she believed the TRADE-OFF of the PROBABILITY of negative consequences was greater than the PROBABILITY of positive associated consequences of her taking assertive action.

In my opinion, she didn’t take into consideration the multiple negative consequences of her not taking action. As a direct result of her not responding and being a “silent victim”. She regrets her inaction. She feels more powerless. She feels she is NOT as assertive as she had previously believed. She sees herself as having more of a victim personality. She is unsure of how she will respond in a more dangerous situation. These feelings are magnified by stories of women who dealt with similar violations in an assertive manner.

I feel that the course of action that would have provided the most positive overall result would have been for the woman to set (Communicate) a verbal boundary with an assertive phrase (Verbal Fence). That puts her Offender on notice that he needs to stop his actions immediately or she will escalate her response (Enforce) as needed. In this case, her escalated response would have resulted in the immediate intervention of the undercover officers in the vicinity.

It is by understanding the rules and behaviors of the DOMAIN you are in, and by practicing (training) responses that you are able to execute the action most likely to create the greatest positive outcome to any threat (problem).