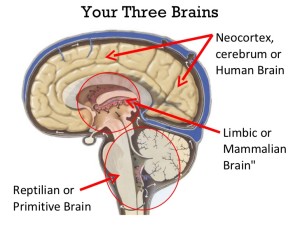 First of all, don’t get all weirded out by the triune brain theory. Yes, most psychologists don’t recognize its validity (always be suspicious of books on the brain written by famous astronomers) but it is a model that works and helps make other concepts easy to grasp.
Here goes:

There are three levels of your brain and they go to violence for entirely different reasons and, in most cases, the types of violence they trigger are completely different.

At the oldest level of your mind, the part that we share with most vertebrates (and hence we call it the Lizard Brain in Conflict Communications) violence is triggered by a fear of immediate death. This is the classic fight/flight/freeze reaction and freezing, (not fighting) is the most common. The fighting usually starts, in the animal world and in ours, when the threat actually bites. It is a deep part of your brain. It is not a part touched by your intelligence, your beliefs and knowledge of strategy and tactics or your training. If this level is triggered, it will be the blind flailing and maybe biting of a panicked animal. None of your skill will come into play.

We spend most of or time in our social/emotional brains. We think we are being logical and thoughtful. In reality, we are trying to stay in the good graces of an imaginary tribe and make sure that things never change (more on this a little later). The violence at this level rarely gets physical, when it does it is (with only two exceptions) designed NOT to injure. Social violence is all about sending messages: You are not one of us. You broke the rules. This is my territory. Treat me better. I am superior to you. Aren’t I cool?

Because of that, social violence has rules. It is designed not to injure (seriously, people, the over-hand punch to the top of the skull that even trained people tend to open a Monkey Dance with is far more likely to hurt your fist than the other monkey.) It requires the message to be acknowledged. That’s a big one. From spanking to execution, punishment violence requires a statement of remorse or our (the punisher’s) monkey brain is not satisfied and we want to escalate. When someone backs down from the dominance game at the lower levels of the MD but then says something insulting as he walks away, the dance is back on and worse.

This drives a lot of the way social violence happens: there must be a justification, and the threat will get in your face screaming insults hoping you will scream one back so that he can blame you. It starts eye-to eye (or in punishment violence sometimes in a submissive posture). The violence escalates from pure social (talk, from gossip to insults to threats) to display and then to pain, then to cosmetic damage. Almost never to serious injury or death. When it does go to death (only two types within the tribe) it is savage, a venting and a display. It is still communication.

Almost every aspect of fighting this way is inefficient, if not stupid. Being in front of the guy? Using techniques that do minimal damage? Letting him set the end-game by submission signals?

This is the default value. Our minds spend the most time here. In almost any conflict with another human we will instinctively and unconsciously default to this value. It takes an act of will or experience to NOT fight socially. I have yet to see a training that overcomes this instinct (though many say they do– look at videos of force on force training from almost any school and you will still see these defaults.)

The human brain solves problems. It is intelligent, wise and can make the world a better place. Humans, despite their beliefs, spend almost zero time in this part of their brains. “No, not me!” Really? Everyone has a sure-fire plan to be (fill in the blank, rich or famous or solve a major problem). Almost no one does it. And the plans are good. If you were to make a plan (human brain) and simply execute it, you could make your life better at every level. The mechanisms are well known (read “Think and Grow Rich” for the blue print). They are extremely reliable and effective. Very few people do them.

Because everyone has a voice in the back of the head saying, “That will never work. Who do you think you are? What if you fail? People will laugh. What if you succeed? Your friends will resent you.” That voice is the Monkey Brain and its one goal is to preserve your place in a tribal structure that went extinct thousands of years ago. The monkey brain is older, more powerful and trumps the human brain.

This post isn’t about self-improvement, however. It’s about the flavors of violence.

Violence coming from the human brain is about solving problems. It is about gathering resources as safely and efficiently as possible. Your monkey brain wants to end the fight with the other monkey in a position of submission. Your human brain knows to start a fight with the other monkey in a position of helplessness. Violence from this level is not about winning. It is about subduing or destroying and there is no value in the other monkey knowing who did it or how. If they know how or who, you have given up information. You human brain knows that it never serves you to give up information.

(And right now as you feel yourself come up with counter-examples and what-ifs, taste the feeling in your brain. That is the Monkey, your limbic system, chattering using logic that sounds valid so that you can discount information that might weaken it. Savor the feeling so that you can recognize it later.)

Human level violence is quick, efficient. Close/hard/fast/surprise. The resource/victim/problem never gets a chance. Either physically or mentally (a well timed threat works just as well as physical violence with fewer complications) the action is literally overwhelming. It is never about the threat as an individual or person. It is about solving the problem. Getting money for drugs to a robber or serving a high-risk warrant for an entry team.

Most people never, in their entire lives, break out of the grip of their own monkey brain to experience this. They know they can. They know how to. Some are told their training is all about this (and this is where WingchungIncas’ comment is extremely relevant). Saying the words is one thing. Practicing the techniques (which boil down to cheating at an astronomical level) and giving yourself permission to do things that violate your monkey protocols… without those pieces it’s all just words.

You can utterly destroy bigger, stronger and better trained people… but you can’t outfight them. Those are qualitatively different things. And as long as you are in your monkey brain and can’t flip the switch (to either human for skill or lizard for ferocity, or both for something really special) you WILL be trying to fight as communication and, against a predator, you will lose.