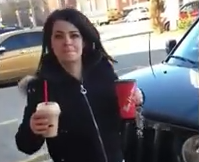 This video confrontation is very useful for illustrating a number of points.

There is a systemic problem of people illegally parking in Accessible Parking Spaces. This problem is the result of a certain segment of drivers who have an underlying lack of respect for people with disabilities. This lack of respect translates into parking violations. While the majority of drivers don’t engage in this behavior, throughout the world, there are a certain percentage of drivers that commit this violation.

When some women speak of a “Rape Culture”, they are talking about an underlying societal lack of respect for women that they feel leads to sexual harassment and violations. While the majority of people don’t commit these violations, throughout the world there is a certain percentage of the population that does.

In both cases, increasing underlying respect for people with disabilities and women will reduce the number of both types of violations. The problem is that regardless of how much society may try to change the overall culture through education and establishing new “social norms”, there will always be people who are motivated primarily by their own self-interest at the expense of others. These people require the use of enforcement to change and/or limit their behavior.

Where there exists a high level of recurring violations, there is usually systematic ineffective enforcement. When there are minimal repercussions for committing violations regardless of whether they are parking offenses or sexual harassment, violations will occur on a regular basis. A certain segment of society will break the rules as long as they think they can get away with it. Therefore, while these people may never learn underlying societal respect, at the very least, they need to learn to respect the “enforcement of the rules”.

When it comes to _________, violations are haphazardly enforced. Sometimes the punishment is severe, many times it is lenient or non-existent. Much of the time, violators get away with it and become repeat offenders. Violators that are caught red handed, usually claim it was a misunderstanding. As a practical matter, many victims don’t feel that they have much legal recourse. They don’t feel that justice is or will be served.

Does the preceding paragraph refer to parking, sexual harassment, or both types of violations?

When citizens don’t feel that they can depend on the police and legal system to properly enforce violations, certain people tend to take matters into their own hands. They engage in self-enforcement. These actions could be called Bystander Intervention or they could also be called Vigilantism.Sometimes this self-enforcement uses public shaming as a method to punish offenders. Other times, self-enforcement uses violence to create the desired result.

Getting back to the video. Here is my interpretation.

I see this video of an example of systemic conflict mis-management. These types of incidents are the inenvitable result of ineffective enforcement of Accessible Parking and a general lack of ability of citizens to handle interpersonal conflict.

If societal-enforcement of parking violations was increased, overall violations would decrease and citizens would not feel the need to engage in aggressive self-enforcement. For example, raise the fine to $1,000 per violation and consistently enforce it. Provide citizens with a non-confrontational means to engage in self-enforcement such as simply taking a photograph of the offending parked vehicle and submitting it to the police. Take these measures and the problem would be dramatically reduced.

People need to be educated on more effective ways to manage conflict. In this case, the Man could have simply said “You realize that is an Accessible Space, right?” and left it at that. Beginning an encounter such as this with a video recording is bound to cause an escalation of the situation. On her part, the Woman could have responded with “Yes, I guess I was just being lazy.” Message sent. Message received. Conflict over.

Instead, this incident spun out of control. But it serves as an example of how systemic problems and lack of conflict management skills will lead to regular events of conflict in society.

Here are some news stories on the incident:

Police warn woman who used disabled parking, as man who made video has regrets