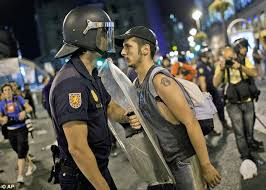 The fundamental problems I have are as follows

#1- I talked about “Questions that aren’t being asked” as an introduction to the idea how just a little extra (or less) information influence what people — and I use this term loosely — think.
https://www.facebook.com/notes/marc-macyoung/ask-the-questions-they-didnt/10153526552063089

#2 – “Everyone knows what something means until there’s a problem” (I first learned this saying from a contract lawyer – it’s a damned good ) What does the term ‘deescalation’ mean to you?

That IS a question, BTW.

#3 Everyone lies. Or at least edits and spins things in their favor — especially when it comes to narratives and tales of woe. It’s easy to claim racism, discrimination or oppression regarding an encounter with police, but the questions are
a- what were you doing when stopped
b- how were you behaving during the encounter?
Quite often, upon viewing video of the incident, well Little Bo Peep demonstrates that no… it wasn’t the cop being out of control. (That’s the unintended consequences of personal cameras — the amount of complaints about the cops do go down, but at the same time they usually prove why the officer needed to do what was done. It’s also bumping conviction rates.)

3a – Cops lie all the time. A super majority of these however involve creating a stronger case for the prosecution. More important than your skin color of is if the cop decides you need to be off the streets because you’re a danger/problem. In which case yes, they will lie their asses off. (Tie this back with three and you a complicated situation.)

#4 – There is NO one-stop, universal deescalation strategy that works 100% of the time.

I tell people that 90% of situations can be deescalated. That means there’s 10% that are going to go sideways no matter what. (For example, someone who wants to commit suicide by cop is more than likely going to land in that 10%)

But that 90% is VERY provisional. It is dependent on three primary things
a- you have the time
b- you have the resources
c- who is doing it

Just because 90% of all situations CAN be deescalated, doesn’t mean they WILL be. And usually the biggest element of yeah or nay is time. IS there enough time to do so before someone (including the cops) will get hurt?

I’m going to blend B and C…

As I tell civilians, to recognize “Not here, not now, not you” when it comes to handling legal issues and the cops, the same goes for people on the other side of the equation. There are certain situations where — while a situation can be deescalated – it ISN’T going to happen with the officer who is standing there.

For example, I used to really like working with females in security. Often a women in authority can walk up to a man and straight up, boobies. He’ll calm down and listen to her, more than he would another man. Had I tried, there was a good chance that the guy would puff up and try and measure dicks. Conversely, there were two times where, I’d step up. One was dealing with ethnic cultures where power dynamics and gender roles are different. Two, when the guy demonstrated overt sexism. In either case, if she tried to handle this guy and the shit would hit the fan.

So it sounds like I’m just talking C. But realize that B is there too. A huge thing is are there six cops there? Is there one person who, if one gets the time, could talk it down? And how do you know, which of the six it’s going to be? Do you have the time (A ) to try all six?

( David Equality McGregor, I’m going to suggest that something else is often going on when it comes to whether ‘cops only try to deescalate with whites.’ You can find a fascinating difference of behavior from a LARGE percentage of the people cops deal with by talking to both Black and White cops about how that percentage treats them [the cops] because of their skin color. I assure you, you WILL find a very telling difference.)

One of the larger problems that we — as a society — are facing is the belief that an individual’s life trumps all.

For example, a loved one has an serious illness. How much money are you going to spend to ‘save’ that person? More than that, how much money should the insurance company spend. What degree of heroic (and expensive) measures should the medical staff go?

As a individual, it’s the right thing to do, so the sky is the limit. But in a nation of 320 million people that attitude would bankrupt the economy. I’m not even talking about it applying to EVERYBODY. I’m talking about the millions of sick people right now. (But if life trumps all, sure go ahead, destroy the economy.)

So moral based system works for an individual, Great. Whoo Hoo! But upscale it …. and you got problems.

That is why you have to take a results based approach when you are dealing with situations the results of which extend past the individual.

And that includes discussing where, we as a society, say ‘What is and is not acceptable use of force.” Because here’s a hint, “Violence never solved anything” is an extremist and unsupportable position (easily disproven too). Yet, if that IS your position, then there is never a good use of force.

That is my fundamental problems with how people are demanding police deescalation. A concept, which BTW, I am really, really for, but not the way that a lot of people mean it.