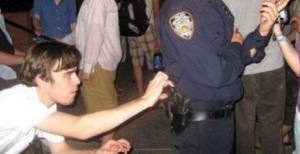 This is from something I’m writing.

…Yet there’s a lot of people who believe getting drunk and wandering around in public is their right. Often they’re young and relying on social conventions to keep them safe — even when they’re breaking them.

I won’t go into to deeply here, but I coined the term “Disneyland State of Mind” (DSoM) where people expect both safety and to be entertained. More than that, they demand both be free. (Disneyland is a marvel of safety engineering, but you pay a premium price for entry.) In the DSoM they engage in high risk behavior, because — wait for it — it’s their right. I liken this to a bunch of young people, who after crawling over fences and past keep out signs are partying at the edge of a cliff. It’s fun, it’s exciting, here have another drink. Gee, a bunch of rowdy drunks at cliff side, nothing could go wrong there.

The reason I mention this is the greatest danger to people in the DSoM are other people in the same mindset. Not predators, not criminals, not violent street gangs, but people as drunk, excited and stupid as they are. Do those other dangers exist? Yes. But one of the hallmarks of DSoM is fury and outrage over being told ‘no.’ How dare you tell them to stop! It is their right to _____(fill in the blank)!

In case you missed it, when things don’t go their way, people in the DSoM get aggressive, hostile and physically violent awfully damned fast. And once again, it doesn’t matter what sex they are; they’ll physically attack without hesitation. Being already intoxicated and in an excited state initiating physical violence seems like a really good idea. Now what the outcome will be is an entirely different matter. But that’s not what they’re thinking about when they swing, throw something or shove. (BTW, this isn’t exclusive to men.)

I coined the term Disneyland State of Mind after reading Lawrence Gonzales’ “Deep Survival.” He used the term ‘Vacation State of Mind’ (what I call ‘Hermit Crab Mindset’). VSOM/Hermit Crab both have the assumption of safety outside one’s normal environment. However, the Disneyland State Of Mind is a pernicious variation in that it mixes that with someone’s perceived ‘right to have fun.’ DSOM usually crosses into illegal and dangerous behavior (e.g. drunk driving, wandering the streets while high, partying with criminals and violent people, etc.) The problem with the DSOM is how often the danger is considered part of the fun.

Hermit Crab: Bringing their attitudes, behaviors and expectations into dangerously different circumstances. What differentiates the Hermit Crab Mentality from the Disneyland State of Mind is fun, excitement and misbehaving. Both assume safety. Both assume that whatever subjective standards the person has apply anywhere they go. While people in the DSOM will actively do things that are dangerous, wrong and often illegal, the Hermit Crab is usually less aggressive. A DSOM will go slumming to a biker/dive bar, get drunk, high, misbehave and become quarrelsome when he’s told to knock it off. A Hermit Crab will think it’s her right to walk home in safety. And that ‘right’ will keep her safe …

Here’s a little bundle of suck about this issue. The greatest danger to the person in the DSOM is someone else in the DSOM.

I liken the DSOM to partying at the side of a cliff. A cliff that in order to reach, everyone there had to ignore the signs, climb over the guard rail, cut a hole in the fence, crawl through and then proceed to party (booze, drugs, fun and excitement). Again the cliff adds to the fun, as does the breaking prohibitions.

Speaking as an experienced adult, we immediately recognize that having a bunch of excited drunks at the edge of a cliff can go bad in all kinds of ways. Which is why the safety measures are there.

Here’s where the danger really starts. That is when people are in the DSOM, they tend to get angry with their fun is interrupted. It’s a short — and REAL fast — step from excited and fun to excited and violent. That applies to ‘anybody’ in the DSOM. Except there’s this thing called the edge of the cliff.

Now here’s the booger about the DSOM, take away the obvious cliff edge. Where is it that they ‘cross the line’ into seriously bad shit? Like where is the ‘line’ between a good time and a felony? You got a whole bunch of people who have crossed lots and lots of lines to get there in the first place. And in their excited, fun fun fun perspective, how likely are they to see that ‘line too far?’

***
Another aspect of the DSoM, “Let’s do this because it would be funny”