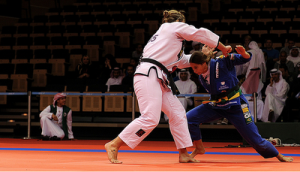 Someone just asked me if “BJJ really teaches smaller people to defeat bigger.” Apparently this is the new marketing claim. My answer…
***

First off: BJJ and it’s hybrid offspring MMA are the two most muscle intensive sports fighting systems I know of.

Second: ANY system with weight classes is a sport

Third: Any sports system with weight classifications has lost the components of being ‘giant killers.’ Or midget slayers. See you fight guys bigger than you differently than you do guys the same size. But you also have to fight smaller guys differently than those two. Most of what is being taught as sports fighting is same age, same size and same skill level.

(In Junior High school, my brother was on the wrestling team. He was also bigger than me. He and I fought. So I got used to going to the ground with bigger people. When I was in JHS, wrestling was part of PE. On the mat, I could kick the asses of everyone in my class EXCEPT Manuel Alanzo. For three years straight that guy handed me my ass. He was a kid smaller than me with four older brothers. Like me Manuel had learned specific moves to be a giant slayer. I, on the other hand, fell into Manuel’s definition of ‘bigger.’)

Fourth, unless the instructor SPECIFICALLY teaches giant/midget slaying techniques as additional to the standard same size/same age/same experience sports curriculum no system ‘automatically’ teaches you how to do it.