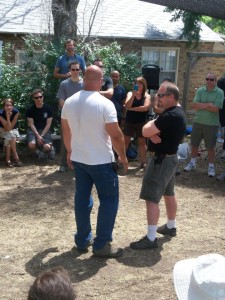 It’s not just you. It’s not just the threat. There is a layered interplay between and through the involved people in any situation. It is affected by other people who might be around (witnesses and also audience) and even geography. People who feel trapped respond very differently than people who feel free to leave. The invisible thoughts and imaginary fears and beliefs have a huge impact on behavior. The officer who has been counseled about a recent force incident will reliably have a slight hesitation in his or her next force incident.

A hit is a simple thing and you can work to perfect your strike… but hitting someone is not a simple thing and will be affected by the threat’s movement and body composition and skill and positioning and to a great extent by his mindset.
And your strike, which you have practiced to physical perfection, will be affected by your mind. Sometimes, we call that choking.
Logic of violence the other day, this was coming up a lot.

“Someone is approaching and you think he might have bad intent. Do you make eye contact?”
“What if the threat doesn’t respond to your boundaries?”
“Can you back up while setting a boundary? What if you circle?”

The thing is, everyone knows the answers to all of these. Humans are communicating animals—it is what we do. But we don’t, generally, have a conscious skill at it and we do, generally, have an over-active “what-if monkey” imagination.

A smile can show pleasure. It can show confidence. It can show a snotty superiority. But a big smile is the exact same facial expression as a grimace—what a chimp does when it is afraid—except for the eyes.
So, do you make eye contact when you think someone with bad intent is approaching? Depends. When you make eye contact, do you pair it with the body language of a terrified monkey? Or the body language of a bored predator? Do you have any idea how you actually look?

This is huge. Conflict Communications has the bones, all the underlying necessary structure. Logic of Violence gat people thinking and looking at the problem. Both programs increase your ability to communicate mindfully.
But it takes practice and a level of self-awareness.

I don’t have the skills, but I’m curious what a good acting coach could contribute in the realms of crisis communication and self-defense. Not acting as in faking, although there may be an element of that—but an actor’s job is to communicate consciously. To send a specific message with face, voice and body language.
Intriguing.

Tying it back, since I went off on a tangent.
Everything depends on interplay. It succeeds or fails in the chaos of the Four Factors (You, Threat, Environment and Luck). Skill in isolation is almost unrelated (maybe 1:3 correlation) to effectiveness in application. That goes for physical skills and verbal skills and awareness skills (bad guys hide their intentions).

Physically you must generate kinetic energy, get that energy to where it will do the most good, and make damn sure the bad guy is where you need him to be. Verbally, you must be able to make sure that the message received is the message you intended to send. Observationally, you must read the threat as well as signs of the threat’s deception and signs of his or her skill at deception.
Life is a moving target.