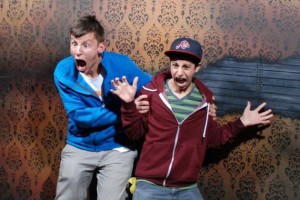 Let’s start with the fact that there’s a difference between fear management and danger management. I’m talking in extremes here, but it’s to communicate an idea.

Let’s say you’re terrified of vampires. No amount of rational explanation that vampires don’t exist and aren’t a danger is going to help. That’s because ‘terror’ comes from a deeper level of your brain than rational. However, if someone gives you a talisman (like a cross) and says “This will keep away the vampires” then that’s going really seem to work.

By giving you a talisman against vampires, it confirms vampires exist, that they are a danger and that without this talisman you are in danger. By having this talisman you are emotionally empowered without ever addressing the fact that vampires don’t exist. Or, that you believe in them and are letting fear of imaginary monsters guide your life.

That is fear management. It only addresses the emotions, NOT the actual problem.

Having lived in the desert, I can tell you that scorpions are real. Worse it isn’t the big ugly black ones that are dangerous, it’s the  little, hard-to-see small brown ones that will kill you. Being stung by a scorpion is a very legitimate danger in the desert.

However, if you develop certain habits –like shaking out your boots, pulling your bed covers back before you climb in, not going barefoot, not sticking your hand into dark places, wearing gloves when moving piles of stuff outdoors, etc.– you reduce your chances of getting stung by about 99%.

When It Gets Mixed and Mushed

Let’s say someone is paranoid about scorpions. Because they are real, you can’t totally dismiss the danger. But what’s worse is that fear will, not only color, but often undermine danger protocols.

For example that person will spend 10 minutes shaking his boot because the scorpion that might be in there might somehow manage to hang on. In real paranoid cases it’s ‘what if it walked through some superglue before it climbed in and is glued to the inside of the boot?’ (again, obviously an extreme, but fear and imagination are closely linked). But not matter how unrealistic the imagined danger is, it appears real to that person.

The problem with the fear and danger combo is that — while the actual danger is finite — your imagination is infinite.

(As an aside I was talking to an evolutionary psychology prof and he explained that imagination is a survival tool. Animals have instincts [behaviors that don’t have to be taught and are preprogrammed]. Animals will automatically attempt to do these regardless of conditions [e.g. a northern squirrel in a zoo in Florida will still horde food for winter].  Humans, on the other hand, have imagination, which is a far more powerful survival tool. Some caveman noticed that every year there are times of green and lots of food and times of white and limited food. When everything was green and lots to eat, but imagining the white stuff would come back, early man figured out squirreling away the food is a good idea. With this powerful tool mankind has managed to adapt to every environment on this planet. That’s imagination when it works. When it spins out of control, is when you have a problem.)

When fear and imagination mix about legitimate danger, this part of your brain will always find new and more complex ways to scare you — with more complex and lurid versions of danger. Versions, incidentally, that somehow always manage to do a work around legitimate danger management protocols (e.g. scorpions and superglue)

This is the driving motivation of people I refer to as WIMs (What If Monkeys). They are always asking ‘what if it doesn’t work?‘ about any danger management protocol.  Not only does their imagination take them to a worst case scenario, but it takes them there before they understand how the management protocol work against legitimate dangers. They’ve already decided it won’t work against flying-vampire-scorpions, so they don’t bother developing that habit. Unfortunately, WIMs are attracted to the subjects of self-defense  and personal safety like class action suit lawyers to an oil spill.

So too are the purveyors of fine and powerful talismans.

In fact, they have the ultimate self-defense talisman for just $9,999.99 (plus yearly renewal fees and additional training.) While talisman thinking often revolves around a self-defense item, most of it comes in the form of training (they’ll sell you both the cross and the special prayer to repel vampires).

From a danger management perspective programs promoting ‘talisman thinking’ have just enough truth to make them appear legitimate. Unfortunately, most of these ultimate talismans are only one microscopic aspect of legitimate danger management protocols. They’ve taken one small aspect, overblown it and magnified it to such a degree that it actually increases danger from other directions.

Using the previous example, these guys will sell you the ultimate scorpion proof tactical gloves (with additional chain maille add-ons for only $4,999 more). These talismans are so you will never have to worry about getting stung by a scorpion again. A person’s fears about scorpions is pandered to, but at the same time he stops shaking his boots, checking his bed and walks around outside barefoot.  If you live in the desert, that’s bad.

If that sounds odd, realize: Fear management can REALLY become deeply enmeshed in our concept of who we are. A lot of people use it as a form of self-identification. In fact, it can often become a form of elitism. That’s the person who sniffs in distain at ‘sheeple’ who are not prepared or aware of the danger like he is. You could hand these guys “Elitist paranoid and proud of it” shirts.

It is only a small step from being paranoid to being a fanatic because you’ve found the TRUTH™ Like we said, both can become powerful elements in one’s self-identity.

1. This is a DECIDE stage in terms of the 5D’s of Self-Defense – DECIDE– DETER-DISRUPT-DISENGAGE-DEBRIEF
It deals with educating yourself about how humans deal with fear and danger.

2. This is a 3rd Dimensional category (Psychology, Physiology, Behavioral) in terms of the Multi-Dimensional Paradigms of Self-Defense