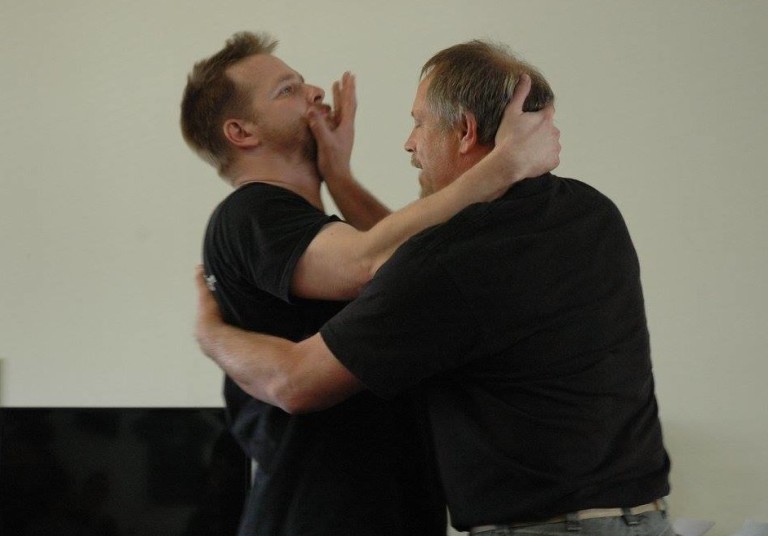 There’s a vocabulary to close combat that a lot of people lack. You need to be able to understand and identify touches, and that’s hard. Infighting is hard to learn verbally or visually anyway. The eyes and neocortex are too slow and you need to work a deeper part of your brain. That part works really well with touches.

If I tell a striker to grab my head and pull it to his hip, he will tug down, actually setting my bones more strongly against his direction of pull. If I tell a grappler, he will effortlessly twist with the pull. My spine will be extended, compromised, and the action will be easy. Here’s the cool part– if the striker noticed this and tried to emulate the twist, almost always his hand will slide off.

The grappler makes his grip ‘sticky’ not in the sense of sweat or goo, it’s just something different in the grip. Almost all grapplers understand this immediately: “Make your hand sticky”. Very few strikers do.

A tai chi guy once tried to show me a structure trick. It was new and amazing for him. For me it was basic judo. Mike (sensei Moore) used to say, “Lock your tendons. Use your bones. Rest. Make him work. Make him try to wear down your bones with his muscle.” What I later learned in striking arts as structure was a basic skill in grappling. Something hardly worth naming. Just a way to rest. A feeling that everyone knew.

Working with Nicholas Yang at one point there was a new feeling. I’m not a big push-hands guy. For the most part, that problem can be solved with a stinging slap, but I like playing with moving structure. Structure is relatively simple, maintaining it moving and head-to-toe is a much bigger challenge. It is also almost entirely a matter of feel. It’s hard to see good structure.

Usually, even moving, good structure feels like bone. It feels solid. Good fluidity feels like meat, soft and unresisting, like a raw steak. Bad structure feels like tinkertoys, little hard parts and little joints that slip and stick and get in one another’s way. Some of the best I’ve ever played with could make one shoulder supple and fluid as water and make the other simultaneously rock solid. That’s cool.

Playing with Nick, at one point he went gellid. This is where vocabulary fails. Humans don’t have good words for touches or smells. Nick was fluid and solid both. I could push his arms but there was none of the slight jerking as different muscle bundles took control of the bone. It was like pushing against rubber, or trying to run in a bad dream. A completely new sensation. And that’s very cool.

This post isn’t really about anything. Touch. Stay alert to the world. Don’t rely on your eyes. Have fun.