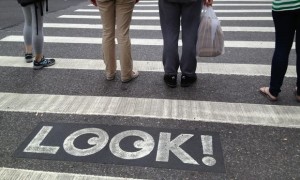 Every year in the United States some 76,000 pedestrians are injured in traffic accidents. Another 4,000 are killed. Alcohol was involved (either the Driver or Pedestrian) in almost 50% of the incidents of Pedestrian death.

For discussion purposes, let’s focus on only those incidents that occur in designated crosswalks where the pedestrian has the right of way. In those incidents, the Driver is at legally at fault and is to “blame”.

Assume there are two Belief Systems on how to reduce these incidents. The first System, feels that the problem is a culture of Driver carelessness and willful disregard for the lives of Pedestrians. This System believes that the Solution is mandated Driver Education. All Drivers should receive extensive training and education starting at an early age on the importance of Pedestrian rights. In this System, Pedestrians have the “right” to cross regardless of whether they take safety precautions, are drunk, looking at their phone, or dressed in dark clothing on a dark night. It doesn’t matter. Since the Driver is too blame, all efforts should focus on changing Driver behavior via Driver Education.

Implementation of this System is likely to lead to reduced incidents of Driver’s hitting Pedestrians due to the Driver’s carelessness and reckless disregard up to a certain point. But human nature being what it is, not all Drivers will change their behavior. Some will ignore the Education. Some truly don’t care about the lives of Pedestrians. Pedestrians, on the other hand, since they are “not at fault” will just cross the street regardless. Whether or not they get hit is completely in the hands of the Drivers. The end result will be a constant level of Pedestrians being hit by at fault Drivers. The number of Pedestrians getting hit will be proportional to the number of careless and reckless Drivers who reject and disregard the Education.

An alternative Belief System feels that promoting Pedestrian safety measures is the most effective method to reduce incidents. This System promotes the Education of all Pedestrians beginning at an early age on how to safely navigate a street at a crosswalk without getting hit. The focus is on Pedestrian not Driver behavior. But human nature being what it is, not all Pedestrians will change their behavior. Some will ignore the Education. Some will reject it. Some will engage in risky behaviors such as drunken street crossing in dark clothing despite the risk.

Implementation of this System will likely lead to reduced incidents of Pedestrians getting hit by Drivers up to a certain point. The number of incidents will level off and be proportional to the number of careless and reckless Pedestrians who reject and disregard the Education.
Most likely both these Systems will reduce the overall number of incidents to some degree. But what they will definitely do is change the character of the incidents. In the first Belief System, most incidents will be the result of careless/reckless Drivers and regular Pedestrians. In the second System, most incidents will be the result of careless/reckless Pedestrians and regular Drivers. But both Systems will NOT dramatically reduce incidents due to the inherent difficultly of controlling human behavior with only educational programs (as opposed to using force or brainwashing).

When it comes to personal safety, particularly for women, there is a Belief System that promotes Perpetrator Education as the most effective means to reduce violating incidents. All the focus needs to be on changing potential Perpetrator behavior. Many advocates of this System feel that self-defense measures are victim-blaming and should not be encouraged.
There is a second Belief System that promotes Self-Defense Education for all potential Victims as the most effective means to reduce violent incidents. All focus should be on changing potential Victim behavior.

Among these two Systems there seems to be minimal support and much opposition to the idea of changing BOTH potential Perpetrator AND potential Victim behavior.

In this case, it seems that adherence to a particular Belief System has taken priority over actually reducing the number of incidents of violation.