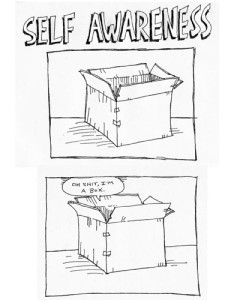 Most of the time, people are thinking cause and not effect, or motion rather than results. “I can’t do that (hit hard, or knock someone down or pull a trigger) because I’m (too weak, too small, too…)” It’s mostly horseshit. You can do it (get the effect) but you probably can’t do it in that way.

Can’t do some kind of force block against a stronger man’s kick? Congratulations, you’re normal. But doing that particular defense against that particular attack isn’t the point. The point is to not get hit. Not getting hit is much easier. And much more personal. Small people and large people do it differently, as do timid and aggressive people. It’s not a one-size fits all.

Anyone, barring vegetative states or nearly complete paralysis, can take out anybody else. They just can’t all do it the same way. You can’t score on your sifu? He can’t block a bullet. Competitor so tough he can take anything you dish out? Quit using your fists and use a car. This mindset ties back to cheating and a number of other things. The big idea to take away, though, is to understand when you are limiting your own options because you have either chosen or been brainwashed to look at a situation from only one point of view.

“I can’t do that,” she said. It was a basic self-defense problem, a question that has been asked and answered a hundred times. And that’s what I do professionally, so three different proven, workable options off the top of my head in ten seconds.

“Those don’t work.”
“You’ve tried them?”
“No, but you don’t understand. I can’t do that.”
Oh. This was never about trying to find an answer. This was about preserving identity. Nick asked me once about students who just don’t get it. There aren’t a lot of people who can’t get it. There are a fair number who refuse to get it. I walk away from those.

You can teach people who want to learn. Despite almost any psychological trauma or physical or mental disability, it is a matter of finding the words and the modality, a way to communicate and a way to practice. It’s not that hard.

But you cannot teach people who refuse to learn. No matter how enthusiastic they seem or the certificates they have collected, if they are coming to you to get their world view confirmed instead of refined (or, preferably, rocked), you are wasting your time.

Understand this– they are not wasting their own time. They carefully sift what you say, latch on to anything they like, completely forget anything they don’t and walk away more ignorant and more confident than when they arrived. It is good value for them. That is what they want.

And when an inability “I can’t” has become part of their identity, they will fight the truth with everything they have.