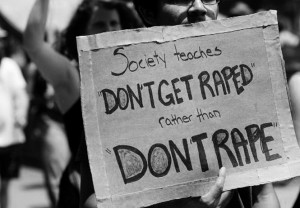 My response to this article follows:

I don’t refer to the “‘fallacy’ of rape culture” but I do question it’s accuracy.

First off, experience has taught me to question any term that is both self-defined and controlled by the people who claim to be the ‘victim’ of it. (Throw in created by and you really get fun, fun, fun.) I find it particularly problematic when the term ascribes motivations, behaviors and conspiracy to other humans.

Second, years ago — relating to another issue — I came up with the following phrase: Truth is not proprietary. If something is true then you can see manifestations of it in many places and many forms. No one group exclusively holds truth.

Those two combine to form a third point. That is: If a human behavior exists, other people should know about it.

I’m talking about the reaction should be along the lines of ‘Yep, I’ve seen that. In fact, my Aunt Betty…” If an ‘expert’ is talking to someone about an obscure point of the issue, then, if not the same reaction, than at least a ‘That makes sense. Ya know my Aunt Betty…”

If the reaction you’re getting is “What the hell are you talking about?” There’s a ‘slight’ problem.

Fourth, and I’m going to get my geek on here. In hard science there is the following schedule: Hypothesis, theory and law.

Truth is idea precedes hypothesis. But the idea is even more squishy than the untested hypothesis. A hypothesis is a formalization of what the person with the idea thinks is going on. And that right there is where I have problems with the ideologicalization of soft sciences AND the use of cherry picked soft-science to support ideology.

A fundamental flaw of calling the process by which social, ideological, agenda, driven studies ‘science’ is they lack the key point that moves a hypothesis up to the level of theory. That is testing.

Not in the sense of warm fuzzy “This is true, we all say so”* and finding to support the idea. Instead, testing trying to break it.

Before a hypothesis gets upgraded to a theory, it has to pass testing by people who did NOT create it. People who are actively trying to find flaws in the idea and where it doesn’t hold water. If it fails then the hypothesis is either junked or withdrawn and reworked.

The same process applies with upgrading from a theory to a law, except this time those testing it are coming at it with baseball bats and chains. To meet the criteria of a law, it must work all the time, everywhere and the whole process known. (That is why BTW, evolution — the most tested, proven and documented process ever in history — is still a theory. We knowknow it works, we know 90% of how it works. But there’s still the 10% of a mechanism we don’t know. So it is still deemed ‘a theory.’) The law of gravity however, that passed muster.

This baseball bat and tire iron testing is NOT done in soft sciences (it’s unethical). Still, an idea that is bumped to a hypothesis is tested, before it gets kicked up to an accepted theory. A theory in psychology has stood up to allowed testing — thus far.

Except this process certainly is not done in fields ending in the word, ‘studies.’ Where often hypothesis’s are presented as proven laws and facts. Initially ‘It is so because I say it is so.” But that rapidly morphs into “It is true because we say it is.” This is where the bug in the ointment of ‘if something is true about humans, it should be easily seen shows up.’ If people are asking ‘what the hell are you talking about?’ Y’all got a problem.

Yet, it is not uncommon for fields with ‘studies’ behind their names to claim the mantle of science to repudiate that bug. Or at least that science backs them up (see, this psychological study finds (fill in the blank). Where I have real problems is when the response doesn’t even try for the pretense credibility, but goes straight to the ad hominem, “You can’t see it because you’re part of the problem.”

As an aside, one thing that is thrown in the face of people who point out that certain information is overlooked regarding a subject is ‘the plural of anecdote is not evidence.’ Thereby rejecting anything that would question the idea/hypothesis/narrative.  Yet anytime anecdotal evidence confirms the bias, it is immediately touted AS evidence of the correctness of the idea/hypothesis. Funny double standard that.

Another way this is done is in sound bites — especially about the results in complex fields that people actually know very little about, but think they are informed.

An example is the law. What are the reasons for a finding in a court case? That’s something you’re not going to get in a newspaper article, blog or the 10 o’clock news. You don’t see the evidence the jury saw. What about why an arrest is or isn’t made? Do you know the process and what goes into the decision to arrest? Much less prosecute? These factors — including saving institutional credibility and cash cows — have a much stronger influence on whether an arrest is made or not than an alleged ‘rape culture.’

Fifth, I’m going to change track here and point out something Albert Bernstien wrote in his book “Emotional Vampires” (Bernstein took the DSM personality disorders section and turned it into layman’s terms — as well as providing coping strategies for dealing with them). In his summation of the paranoid personality disorder he clarified a point I’d never seen in print before, but it did draw a “YES! I have seen that behavior” recognition.

Summing it up, People have the wrong idea when they think paranoid. It is an approach of simplicity. It is a way to organize the entire world through one context, one frame of reference. Everything is about (fill in the blank)

Here is a list of behaviors common to ‘paranoid vampires”

I show you this not to say — much less imply — all feminists are paranoid, but that many of the ideas can be exploited and abused by the paranoid.

And straight up, that is often how someone talking about ‘rape culture’ sounds to the average person. Other people don’t see the examples of ‘this is rape culture’ in the same light. It simply does not match their experience, much less how they look at the world. They see too many other factors, variables and possibilities. This doesn’t make them wrong or part of the conspiracy, it simply means there are other considerations than are covered with the idea/hypothesis of there being a universal, systemic ‘rape culture.’

I have sat down and asked people to explain the concept to me. I’ve listened without argument, disagreement or attempting to pick apart. I have walked away from these sessions with three critiques of the topic

1) There are serious issues with what is deemed proofs (not just from a scientific perspective, but also logical)

2) From a very specific socio-economic and sub-cultural point of view, the idea does make sense. That is to say, it makes sense from a specialized point of view. A point that doesn’t just allow for, but requires a chain of factors to be true.

The problem is if one of those ‘links’ in the chain is broken, you end up somewhere else.

3) Like science, when a cherished hypothesis is being debunked there are those who cling fiercely to it. Ideas/hypothesis die hard. Still in actual science, when a hypothesis is found to be unsound (or at least not universal) it is pulled back and reworked. It is not justified, excuses and apologized for and then people told it’s still true. If that is happening we’ve moved into junk science, scientism or more accurately agenda hiding behind the mantle of science.

Unfortunately unlike science, but very much like religion, once an idea becomes considered a ‘truth’ the fanatics come into the equation. Included in this is the use of these ultimate truths as an attack medium. Even sitting there trying to understand the concept, I have often faced the condemnation and criticism inherent in the idea/hypothesis/explanation. I will go so far as to say this criticism and condemnation is built in to the chain of assumptions one must accept to find the idea of rape culture self-evident.

In actual religious matters, there comes a point where it being a matter of faith is acknowledged. I say this in an absolutely, not critical way. In fact, I really like it. It is an outright acknowledgement of belief. As in “I cannot prove it, it doesn’t make sense, but this is what I believe in.” Great, no problem. Ordinarily, once that is acknowledged, we can find a work around. A way we all can co-exist and muddle our way through this imperfect world.

A common problem with what I call ‘secular causes becoming religions’ is it tends to deny that core ideas are — in fact — unsupportable beliefs. But instead admitting that it is a matter of faith, these beliefs must be protected via junk science, creative interpretation of facts and events, appeals to authority, bandwagon thinking and scientism. Someone wrote a book or said it was true, and all of a sudden it becomes unquestionable truth that every true believer ‘knows.’

Are there serious problems in how society does things, courts handle issue, limitations that we operate under that can and do result in women getting the short end of the stick? Yes.  Very much so and we as a society need to take a good hard look at the realities of these problems. But not because it is unfair to one particular group, but that systemic problems are bad for everyone — not just one identity group

But you don’t solve problems by creating a new narrative about an imaginary problem to force your agenda through — especially ones that deny other people their rights. And we’ve come dangerously close with Title IX in the Violence Against Women Act

Feel free to explain to me how that is not a kangaroo court filled with people who are convinced they are battling the ‘rape culture.’ I will listen.
Comment by Erik Kondo
Imagine a theory based upon the idea that bad things happen to a certain Group of people due to lack of respect for this Group. Incorporated into this Theory is that not believing the Theory and/or disagreeing with this Theory is an indication of disrespect for the Group.

You have now created a Theory that can’t logically be disproved or discredited to it’s followers.