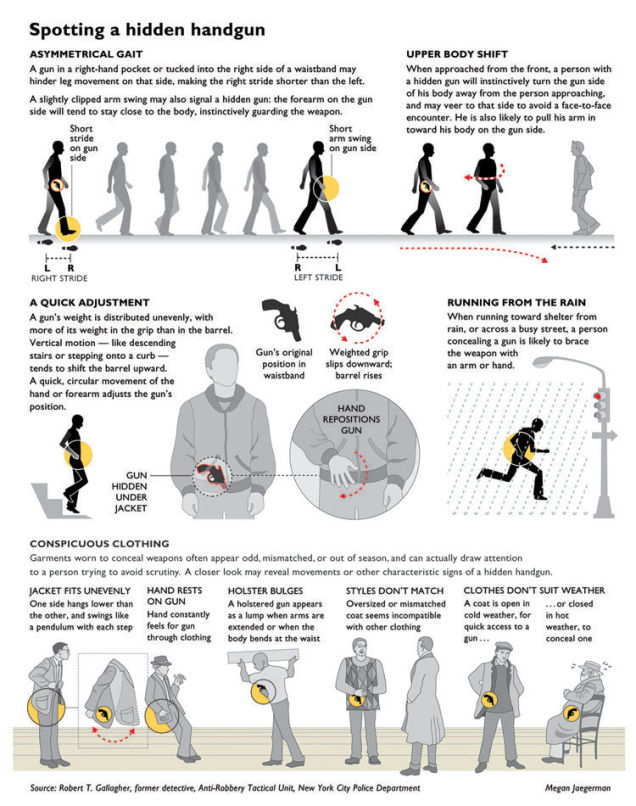 From one standpoint it is technically correct. That standpoint is a cop’s perspective where the presence of a gun is often a crime — especially in the possession of a convicted felon. Oddly enough they have a duty to act when witnessing a crime.From a civilian standpoint, there is serious question. “Why does it matter if someone is armed or not?”Not a ‘well he might…’ bullshit and panicky perspective. But from a you’re going about your business and a legally licensed concealed carry person is going about his or her business, the presence of a firearm is a non-issue. Seriously does someone having a gun influence your choice of picking Swanson or Campbell soup in the supermarket?What should be of far more interest to you than is a person armed is that person’s other behaviors and circumstances.A strange dude who’s giving off bad vibes approaching you in a parking lot. Yeah, that’s where you want to watch for him doing witness check and weapon check (what they called ‘quick adjustment). But there’s a busload of other behaviors that will be telling you you’re in danger.Someone you’ve seriously pissed off, stepping out of the shadows in a weird place and coming at you with bad body language? Yeah, that’s already a bad situation. The presence of a concealed weapon just makes it worse.There is strong movement to create panic about the presence of weapons as a justification for prohibition. The fact of the matter is the person’s behavior is more an indication of danger than just the presence of a weapon. But by ignoring that and calling attention to weapons the fear and panic is pushed.