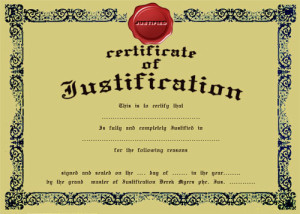 Justification: The act by which a party accused shows and maintains a good and legal reason in court, why he did the thing he is called upon to answer. http://www.lectlaw.com/def/j060.htm

Oh you can think what you did was ‘justified’ but the responsibility of showing and maintaining a good legal reason is on you and your attorney. It ain’t good enough that you thought you had good reason, you have to convince others.

That’s becomes particularly important because by claiming self-defense YOU ARE confessing to a crime.

See, self-defense defense (no I didn’t just stutter) is what is known as an affirmative defense. In short, it’s you saying “I did it … but I had good reason.”

That’s a game changer. Because if you claim SODDI (Some Other Dude Did It) then the burden of proof is on the state. The biggest aspect of the is the state must prove YOU did it. By claiming SD, you’ve just done all the heavy lifting for them. Keep this in mind we’ll come back.

Contrary to whatever your brother-in-law’s-cousin-twice-removed says — IF you claim self-defense you’re going to HAVE to make a statement. Now if you’re talking about a use of lethal force (and that includes knives and strike enhancers) incident then the advice of ‘don’t say a damned thing until you consult with your lawyer’ applies — and this includes even claiming self-defense.

Because if what you did doesn’t qualify as self-defense — or you suck at articulation and cannot explain/provide evidence that it was self-defense — then you’ve confessed to a crime. Now as you’re sitting in the courtroom THAT’S where the lawyer is going to be doing all the talking for you. There’s a damned good chance that your attorney won’t want you testifying because of how a prosecutor can tear someone up on the stand. However, with these days of videoed police interviews a good defense attorney can get away with not having you testify because the prosecution has already played the tapes of the interview (This is why George Zimmerman didn’t take the stand, the jury had watched police interview tapes)

Do you need to have a lawyer present when you are questioned? Not only yes, but HELL yes! But, if you claim SD the production of evidence to warrant justification is ON YOU! And the first person you have to convince that you acted in self-defense is your own attorney. (It also helps to have an attorney who knows the difference between how you defend an innocent/SODDI client and someone who is legitimately going for an affirmative defense.

While we’re at it, the interview is very much a time to introduce evidence that if the DA chooses to prosecute (ordering your arrest) he cannot later dismiss or deny exists (such as adrenal stress, good faith attempts to withdraw, JAM (Jeopardy, Ability, Means)/AOJ (Ability, Opportunity, Jeopardy) and the Five Stages of Violent crime, the influence of Adrenaline and Alcohol on pain and ability to offer threat, the difference between fatal and incapacitating, yada yada, yada.

For the record, I am a court recognized expert witness on violence. My Five Stages of Violent Crime is court tested for articulating Jeopardy and immediate threat. I’ve written  20 or so books and videos on street violence and I have a new book called “In The Name of Self-Defense” which covers dealing with both violence dynamics that lead to violence and the legal aftermath (and how they are not separate issue, but extremely interconnected. As in how your pre-violence behavior can — and will — blow your self-defense claim out of the water. Thereby making your claim of self-defense you confessing to a crime.