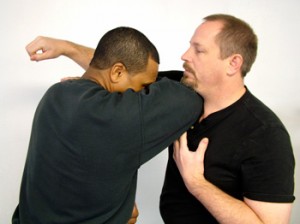 Generally, martial arts are taught very poorly. For the so-called “traditional” Japanese and Okinawan arts, they way they are taught is not traditional at all. For many systems, the first generation of US and European instructors learned just after WWII, from an occupied people who hated them and through shitty translators in large regimented groups. Somehow, this unnatural bastard idea of training got called “traditional” and since it set the standards for training, people assumed it was good. Get this, ‘Standard’ and ‘Good” are not the same thing.

One of the details of this teaching method is correction. The instructor’s job is to tell the student what the student did wrong. Even on the rare occasion when the sensei starts with, “Very good…” there is always a “…but” to follow.

We know micromanaging makes for unproductive and unhappy employees. How and why did it become the norm in a field that should be about survival? If you get corrected no matter what you do, it creates a condition called “learned helplessness” in which the best strategy is to do as little as possible. Why waste energy when you will just be corrected anyway? If you’re going to be punished, why be tired, too?

We had a great crew at the MNVD seminar. A week of intense fun, learning. For me it was a chance to tighten up on teaching methods and compare and contrast with others.

Dealing with violence, there aren’t a lot of good answers. The usual issue is choosing the option that sucks the least. At this venue, all the instructors were on the same page for this: “That’s not what I would have done but you did it and it worked. If I were to tell you something that worked was wrong, that doesn’t make it wrong, that just means I’m an asshole.”

The student’s got the sentiment, they got the words. They actually seemed to revel in and they really grew with the freedom. But even on the last day, there were a few questions about whether someone achieved success ‘correctly.’ And throughout the week, almost everyone had been so brainwashed that when they were not being criticized by the instructors, they were criticizing themselves. One used the Dracula’s Cape technique to evade simultaneous attacks from three people. Get this– at a signal you can’t see, three people, all within arm’s reach, launch at you simultaneously. And you knock one back and successfully get off the X for the other two, who collide. That’s a good day right there.

And you could see the guy who pulled it off listening to an imaginary sensei on his shoulder, telling him it wasn’t perfect. Beating himself up over a success.

We all know, or at least should know, that efficient teaching involves rewarding improvement. Punishing imperfection might keep skills from degrading, but it does nothing to show the way forward. Constant criticism is not good teaching. It rewards passivity and creates victims. Knock it off. In the end, it will brainwash the students so badly that they will create and maintain little imaginary sensei that sit on their shoulders and whisper the criticism even when you aren’t there.

When I was in my 20’s and receiving private pilot flight instruction, my instructor (a former military man) told me that when I did my solo (flew alone for the 1st time), I would hear his voice in my head helping me to land. And sure enough, as I flew the landing pattern, I did. That voice was reassuring. But after I had flown on my own a few times, that voice receded and was replaced by my own.

In order to evolve a skill, you need to replace your instructor’s voice. If you still hear that voice after understanding the basics, you are not evolving. In such a case, as Rory suggests, you may need to eliminate that outside voice by whatever means necessary.