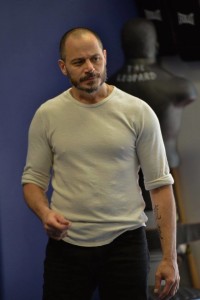 As a self defense teacher/instructor I believe it is important to remember what it was like when we first started learning along with a good understanding of who our audience is when it comes to teaching certain tactics and technical applications as we tend to often get locked down on absolutes.

For example, and this one is very popular amongst the self defense crowd who, for better or worse, seem to be divided on the issue of which is better; striking with an open hand or a closed fist? There are of course sub-arguments within the said argument such as the ‘open hand neck up, closed fist neck down’ but that also is kind of absolute isn’t it?

It doesn’t have to be this particular bone of contention either nor does the argument have to be about a physical response, it could be about any strategy, tactics or tool for that matter such as ‘In a knife attack, is it better to stabilize the weapon hand or fuck stabilization and just ‘attack, attack, attack!!!’?

It does indeed depend; as to eliminate either or restrict anyone of either based on the factual statements made on each could very well be limiting someone’s natural or already trained capacity at doing so and who are we to tell anyone that what has worked for them before all of a sudden won’t, and worst, could cost them their lives?

This is where knowing one’s audience in this field in my opinion, becomes critical.  For example, if a very average 70 year old woman concerned about an immediate potential threat in her life was to learn self defense, it would be somewhat ignorant to believe that teaching her any kind of closed fisted striking (to go back to the original example) would render her effective at such strikes, assuming of course the threat she is facing isn’t from an older, blind and paraplegic woman either eh?

Now if a 30 year old, athletic strong female was interested in learning self defense based on the same concerns; offering her the options of both while also explaining the pros and cons of each, and allowing her to figure out for herself which tactic is most natural, suitable and sensible to her being, and then allowing her to experience each in training to ease her decision would be the way to go.

Switch that to a 25 year old male, heavy weight golden gloves champion, who is interested in learning self defense. To take his natural and proficiently trained ability to strike with a closed fist and ask him to change it to open handed striking as the main and only method of defense doesn’t make sense either.

The same approach should be taken as of the one of the 30 year old athletic female.  Teach both, show the pros and cons of each, and allow the student to experience them in real time/real speed via training to formulate what is best for them.

Here is where the argument heats up however.  Once on close quarter/grappling/wrestling range; striking becomes obsolete for the most part as striking requires 3 integral elements to make it functional: 1. Distance 2. Grounding, and 3. Torque. Remove even 1 of these elements and you’re left with at best 70% capacity of whatever chosen strike.

Now, perhaps the athletic female and golden gloves champion could end the confrontation before it got extreme close quarter with a precise strike, but the average 70 year old or early teen? Generally, not so much.

The lack of expertise, power, training, timing, precision and clarity in the moment once the initial strike didn’t end the fight, but instead escalated it by bringing it closer quarters would make their punch at best; a distraction. Relying on any kind of striking at this point (or grappling submission for that matter) wouldn’t be functional simply because boxing and grappling require regular training and practice to upkeep the functionality of it.

Not to mention, we’re talking about self defense here…. most people who come for self defense training do so because they feel an immediate threat, only a miniscule percentage of the population train self defense out of pure fun and passion or a possible/potential or imagined what if?

Those that don’t are there for more pressing reasons and need strategies, tactics and tools that they could manifest fucking tonight if it was necessary. The arm bar taught and learned in one day to an average 70 year old woman won’t give her the ability to perform it under stress were she to get attacked the week after she learned it…. A primal scream coupled by a barrage of gross motor rip/tear/gouge/bite/strikes paired with her already driven adrenal state however most definitely can. and has on more than enough occasions to make it scientifically proven (for those deemed as victims, not necessarily just the 70 year old woman case).

And here’s why in a mixed group, the teaching of the strategies/tactics and tools aimed at those who are unfortunately perceived as the weaker/victims of our species, are paramount simply because if an average 70 year old woman could wreak havoc on a much larger and more violent assailant with these tools and tactics, imagine what the seasoned golden gloves champ could do with them?

One set of tools & tactics works for both individuals while the other set of tools (not necessarily tactics here) works for only the strong/athletic/attributed/attitude individuals. In many instances, it’s the ego of the strong and athletic that won’t allow them to acknowledge, perhaps, the tools and strategies aimed at the perceived victims, for in their mind, it places them in that category.

Whatever the case, it doesn’t change the fact that they work and work well and are even more devastating in their hands as they also possess an athletic and sport oriented delivery system to back it.

It’s all in the timing of it as well. Is it a 5 to 10 hour workshop? Is the individual in question taking regular and weekly ongoing private or group classes? How pressed are they to learn self defense?  What are their physical limitations if any? Answering these questions allows the instructor to formulate the class(es) to fit their audience.

But to simply reject a strategy, tool or tactic, no matter what it is, even a spinning back kick for that matter, is ridiculous… prioritizing them as per the student, the level of immediate threat they are facing as well as taking into consideration their natural abilities, previous training and potential limitations (pointless to teach a spinning back kick to someone in a wheelchair for example) as well as the amount of training time they have should be how one constructs their daily curriculums and not on one’s own personal abilities and beliefs of what works and/or not.   That’s up to the individual in question.

What works for you may not work for all but what works for all will definitely work for you, at that point, it becomes matter of preference hopefully based on logic and sense as after all, this is self defense we are talking about, in the end, it’s your life on the line; choose wisely.

In my opinion anyway.