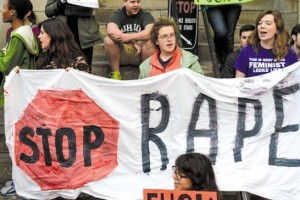 If you have any interest or involvement in the area of sexual assault prevention, most likely you have been exposed to the raging ideological battles revolving around the existence or non-existence of Rape Culture and its effect on the rate of rape and sexual assault in society.

This approach is Macro or Top Down. It is very appealing to many for its simplicity. It puts the blame for sexual assault on men. Women are simply the victims with no agency to influence the outcome of male sexual aggression.

On a theoretical level, Rape Culture makes logical sense. The flaw in this explanation is that it is exclusionary and simplistic. The overall problem of sexual assault in society is the aggregate of multiple individual or micro incidents. Besides male perpetrators and female victims, incidents include, but are not limited to:

1.      Sexual assault among the LGBT community.

2.      Sexual assault of people with disabilities.

3.      Sexual assault of children by both men and women.

The victims in these above four categories are not sexually objectified by cultural norms. In fact, particularly with children and people with disabilities, these victims are traditionally viewed as asexual by society. Therefore, Rape Culture is exclusionary in that its explanation excludes many victims of sexual assault.

Rape Culture is simplistic because it only focuses on ‘Intent’ as the primary factor of sexual assault. There are also two more factors present during incidents of sexual assault. They are Inequality of Relative Power/Control/Status (RPCS) and the victim is Isolated from support systems such as family, friends, bystanders, and protective agents and institutions. These three factors occur in all categories of sexual assault regardless of the gender of the perpetrator and victim.

These 3I’s of Intent, Inequality, and Isolation are analogous to the Fire Triangle. It takes Fuel, Heat, and Air to create and sustain fire. Fighting fire requires eliminating one or more of these elements. Rape Culture focuses only on the element of male sexual Intent and ignores the presence of Inequality and Isolation as additional elements that allow for sexual assault.

The goal of society is to reduce the overall incidents of sexual assault by all available means. That requires minimizing both systemic Inequality and Isolation. Firefighters use all means available to fight fires. They don’t promote and use exclusionary and simplistic tactics that only focus on one type of fire with only one solution. They evaluate all the elements on a case by case basis, and focus on the most appropriate solution for the circumstances.

An opposing view to Rape Culture is that incidents of sexual assault are the result of perpetrators that don’t conform to the norms of society. Therefore, reducing sexual assault involves taking into consideration all the factors involved including the victim’s vulnerabilities and pre-assault behavior, not just the aggressor’s bad intent.

The extremists of the Rape Culture Wars loudly denounce the opposing side’s view. A Rape Culturist sees any perspective that doesn’t focus solely on the perpetrator as “Victim Blaming”.  Those that don’t conform to the Rape Culturist view are denounced as Victim Blamers and Rape Apologists.  On the other hand, those that deny the existence of Rape Culture, ignore the reality of ingrained societal beliefs and institutions that don’t support victims of sexual assault and poorly enforce violations. All of which leads to low levels of reporting and lack of confidence in the system by victims.

Rape Culture doesn’t take into consideration that systemic sexual assaults requires Inequality in the form of the availability of disempowered potential victims who are targeted and successfully victimized. The underlying belief of Rape Culture is that ALL women are equal opportunity targets.  And simply because they are women, no matter what they do or how they behave, they have no ability to effect the outcome of an encounter with any given male. Therefore, ALL males are potential rapists. All men are in need anti-rape education.

Rape Culture effectively creates two uniform categories, vulnerable female victims and male perpetrators, where all males have dominance over all females.  In such an environment, the arguments of Rape Culture make sense.

2.      promotes and rewards the existence of violating Intent, and

In terms of the systemic problem of sexual assault on colleges. Any and all factors that contribute to greater Inequality, Isolation, and Intent increases the overall rate of sexual assault.

Here are some examples:

1.      Actual gender inequality increases the rate of sexual assault. But so does learned helplessness created by intimidated victims conforming to the lowered expectations of gender equality.

2.      Consuming alcohol by a male increases the chance of his committing a sexual assault if the alcohol gives him a feeling of greater RPCS and less moral resistance to assaultive behavior.

5.      Poorly communicating and enforcing the rules and laws of behavior in regards to sexual consent by both victims and protective institutions (college administrations, local law enforcement) increases the rate of sexual assault.

6.      Disempowered bystanders who do not intervene to obvious situations of assaultive behavior increase the opportunities for successful sexual assault.

These are only some of the overall factors involved.

The above list shows that most western college campuses are indeed Violating Cultures. These Violating Cultures combine both the elements of traditional Rape Culture and expanded factors (decried by Rape Culturists as Victim Blaming) such as systemically (binge drinking is a systemic problem) disempowered victims with minimal ability to deter assaults through strong communication and enforcement of personal boundaries.

The solution to systemic violations lies in tackling all the factors that increase the 3I’s of Inequality, Isolation, and Intent on both a macro and micro level, not just the factors which conform to an agenda driven ideology.

It requires a concerted effort to increase respect for victims of sexual assault. Not only by society, but also by the potential victims themselves so they do not fall into the Low RPCS victim pool. It requires increasing respect for the Rules of Behavior through both clear communication (consent education) of the Rules and appropriate enforcement of the Rules by individuals and Institutions.

High RPCS individuals must learn to respect both Low RPCS people and the Rules of Behavior. The overall effect of increasing Respect, Communication, and Enforcement of the Rules will decrease Inequality, lower the ability to create Isolation, and reduce Intent to do harm.  Thereby decreasing the overall rate of sexual assault and all other forms of unwanted behavior on college campuses and elsewhere in society.

Is America A “Rape Culture”?

OTHERS
RAINN comments and recommendations to the White House Task Force to Protect Students from Sexual Assault.
How Not to Talk About a Culture of Sexual Assault