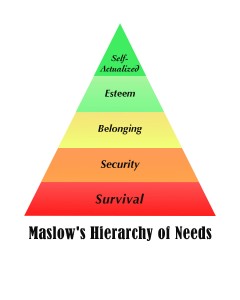 I use Maslow’s pyramid in a lot of my books and classes. Not because it’s great science, there are holes in it you can drive a truck through. I use it partially because it has great predictive power, but mostly because it is so common and universally accepted (which is not the same as ‘understood’) that it’s easy to piggy-back useful information on it. In other words, using Maslow, you can take a person who has only ever experienced social conflict and in a few minutes get  them to accept and understand the existence and even the patterns of asocial violence.

We don’t work through the levels. Babies are born at the esteem level in all but the most dysfunctional families. Our ancestors took care of the two lower levels long ago. Thus, most people in the industrialized world have no frame of reference for the survival and security levels. So much so that the skills that belong there have become hobbies.

The thought: Is it possible to have a genuine* experience of the level you inhabit without experiencing the lower levels?

Taking care of the *asterisk now. Genuine is a a problematic word. Of course anything you are experiencing you are experiencing. It’s by definition genuine, as real as it is. I mean more that there is a gap between what is experienced and what could be experienced. An understanding gap. That it is different than it is perceived. (Note– when I say the blog is where I go to think out loud, this is what it means. Words are not how I naturally think and the translation process can be ugly.)

People who have never dropped below the belonging level tend to either think that membership in a group is important without thinking why, or think it is unimportant. (This is separate from the instinctive tribal drive, I’m talking about the reasons, rationalizations and cognitive process.)

I was raised in a family of self-sufficient, back to the land, grow/hunt your own food yadda yadda yadda. I value groups because raising enough food to feed a family was a metric fuckton of manual labor. I liked being a bookworm and a dreamer, but I realized that those were self-centered, selfish preferences– something I could indulge in during free time, but if that was all I was, someone would have to take up the slack of weeding and packing water and feeding stock and milking and chopping wood.

Same with teams. We had CERT because there were things you could do with a team efficiently and with little injury that would have been either suicidal or murderous to do alone. I still occasionally have dreams about a military service that ended 24 years ago. The bonding when you are dealing with deep Maslow problems is intense.

So I value interdependence and cooperation because of experience. It’s not a knee-jerk reaction I must  justify after the fact, so I see the downsides as well. Nor can I listen to the song, “I Walk Alone” without laughing a little on the inside.

If you’ve never mastered the security level your basic needs are controlled by someone else. You are owned.

If you’ve never had to break into a group, just passed from (and this is poor kid’s fantasy, I have zero experience in this world) country club family to prep school to your dad’s fraternity at Yale and on to the political career assigned for you, you’ve never learned why other people’s feeling are important or how to be considerate. You’ll know the forms of politeness, because those are tribal status markers…but you’ll never understand that courtesy is central to predators living together.

And without all these and putting them into play and getting competent at them, you can simulate self actualization. You can be an artist or devote yourself to causes. But the depth of understanding will be missing. Causes are chosen by the social impact on your friends. You measure your own art by the reaction provoked in others or the price you can charge for it. (Which are valid ways to evaluate art, but not self-actualized ways to evaluate your own art.)

Just a thought, and a thought I have to be careful of. Most of most best friends have depth of experience (which is the polite way to say “profoundly shitty lives”). It becomes easy to conflate ‘people I like better’ with ‘better people,’ And that’s a dangerous trap.