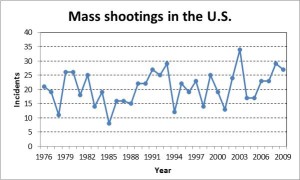 Okay bad news here folks. More than guns, the media causes mass shootings.From a pure numbers standpoint, mass shootings are statistically meaningless. If you look at the FBI Uniform Crime Report there were 12,765 non-negligent homicides (manslaughters/murders, non-LEOs and accidental). Of them ALL kinds of firearms were used in 8,855.
http://www.fbi.gov/…/expanded_homicide_data_table_8

Now if you want to bump the numbers to scare people about guns you add in suicides. Ohhh big scary of the 38,364 suicides in 2012, 19,000 plus were done by firearms.
http://www.cdc.gov/violencepr…/pdf/Suicide_DataSheet-a.pdf

Now, depending on who you ask CDC or other sources, there are between 487,000 suicide attempts (self-inflicted injuries) yet the same source implies there are 959,100 attempts. Another source I read says hospitals treat over 2,000,000 suicide attempts a year. I give you these numbers because whether you vote for 487,000, 959,100 or two million suicide attempts you really have to dig in the CDC numbers to find that in the same year there were only 169 suicide attempts with guns. So it’s pretty obvious that people who are serious about ending their lives use guns. Oddly enough, statistically the most reliable way to kill yourself is by jumping in front of a train, which has a 0% survival rate. Thing is if someone is that dedicated to taking their life, they’re going to find a way, guns or no. So adding in suicides to bump number of ‘gun deaths’ is a red herring.

Okay so back to homicides. Here’s the booger depending on the locale, the numbers of those killed have criminal records upwards to 90%. Allowing for ‘known’ perpetrators the average again comes out to about 95% having criminal records. In short, an overwhelming number of shootings are between those involved in the drug trade or gangs. This especially in the big cities — where most homicides happen. The only way to hide these numbers (and arguably this inconvenient truth) is to include Wyoming and Kansas rednecks shooting each other over messing with their wives. That statistically reduces the professional criminal element common to most homicides.

Now not to sound callous, but innocent people who are gunned down in ‘mass shootings’ seldom top 50 of the yearly homicide rate (12,756 in 2012). But they do make for great media coverage and fear.

Now, growing in Los Angeles in the 1970s, the first time I was involved in a drive by attempt was around 1974 (I was on my way to buy comic books). The shooter missed and I went along my way. I had several classmates who were shot or shot at in this manner. The key point is these incidents were never reported by the media. It was considered criminals trying to kill criminals

In the ’80s and early ’90s the media started covering drive bys. And they increased. To the point that homicides reached an all time high in the US. Gang members would rush home to see how many stations covered their drive bys. The publicity translated into fame.And gang related drive bys went wild.

That’s also an issue when it comes to spree shooters. Although statistically meaningless in how many bodies they produce, the media coverage inspires people looking for fame.