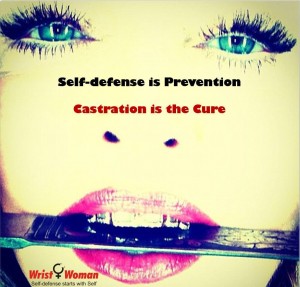 Not to screw up anybody’s warm and fuzzy ‘let’s get revenge’ fantasies, but a knife is a lethal force instrument.

Straight up it is under the same criteria as gun use. And that means attempting to wound is going to get you thrown in prison because the current legal interpretation in most states is if you’re trying to wound, you aren’t in immediate danger of death or grievous bodily injury.

On the plus side (and what makes people trying to find social cures for rape stupid) forcible rape IS deemed as grievous bodily injury. That means you can kill a rapist in the process of attacking you to save yourself. Not torture, not mutilate, KILL. (or do your best which is also often enough to stop the attack)

Fundamentally I object to this meme because it’s more “Wee, wee, wee aren’t we ‘dangerous’ girls for saying this?” Which puts it into the realm of social kudos or shock. We going to scare the middle class people tee hee tee hee!

Coming from a background where rape was a killing offense, cutesy memes about castration, torture and thinking you’re not going to get prosecuted are really stupid. Remember Lorena Bobbit? Right after the prosecutor went after her, he turned around and went after him.