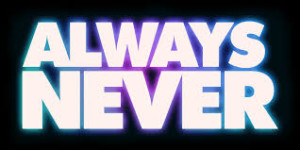 I want to talk about the tyranny of NEVER and ALWAYS thinking. More importantly I’m going to show how if you proceed from these assumptions you have shut your brain off — regardless of how much you tell yourself you are rational, informed, open minded and thinking clearly.

Attorney defends actions of fired school officer as ‘justified and lawful’
All of which have come together in perfect storm over this issue (Oh BTW, this link shows some other considerations)

One of my favorite lines out of the movie “Volcano” is “I’m a scientist, certainty is a big word.” That right there is indicative of the difference between beliefs and actuality. When you’re operating from a belief system (especially one that you tell yourself is logical, factually based and rational) you can be absolutely certain about things that are if not demonstrably wrong, not the whole issue.

Let’s start with “Violence never solved anything.”
Easy to say — and from a very limited perspective — it seems reasonable. Except it is an extremist and unsupportable position. See when you use the word ‘never’ it becomes an absolute. That means it applies every where and to everyone. (Which if you think about it, who the hell is this person claiming to speak for everyone?) See to verify this out to lunch claim, you’d first have to go to EVERY living person on this planet and ask “Has violence ever solved anything for you?” And if ONLY one person were to say “Yes” that absolute is blown out of the water. Yes, that’s how big a word ‘never’ is. But now to really throw in a wobbler, you’d have to build a time machine and do the same of every person who had ever lived. And you thought the idea of asking every person on the planet was ludicrous. But ‘never’ is that big of a word. Yet you have people who have no problem using it in ‘violence never solved anything.
(Reality break, there are times and places where violence is the best answer. Do I believe the bar should be held high? Yes. But that is something we can debate, argue about and compromise over. There is NO compromise with ‘never’ — that’s why it’s important to realize it is an extremist position.)

You should never hit a child.
Well since we have already covered never, let’s look at ‘child.’ Now when you talk about children, it’s easy to imagine 4-8 year-olds.Whereupon ixnay on a full force blow from an adult is understandable. That is unless you’re the CDC and count up to 25 y.o. to bolster you numbers of child suicides and firearms. In which case we have to ask “When does a child, turn into …oh say, a teen” and the use of the word child become deliberately misleading? I ask because the the use of the word ‘child’ has become really common among those condemning this incident. They’re kind of forgetting this occurred at a high school.
Now growing in the streets, I assure you that teens can be quite capable of violence and at causing chaos. So the question is … are we to disallow ANY use of force on someone just because they are under 18? This regardless of what the teen is doing?