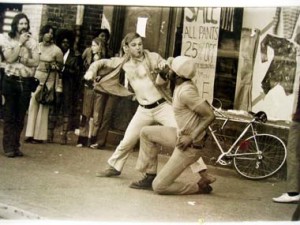 The class was working on power generation, using the center of gravity to slam extra power up into a strike or down into a strike. Two types of wave power. One man interrupted. Through the translator, he said, “But I don’t want to hit. My reaction will be to defuse and avoid.”

Wrong place, wrong time. The class had voted to work on surviving an attack. One of those skills is hitting hard. The defusing and de-escalation part had been the focus of the whole morning. The question was good, in a way, and I had to address the whole class.

There are stages in a fight. If you see something that makes you suspicious, something that’s not quite right, you have options. You can gather more information. You can leave. You can prepare a weapon or alert your friends and partners.

If you do nothing, or don’t see it until the person becomes overtly threatening, you have fewer options. Leaving, de-escalating, gathering resources and alerting your team are still on the table, but now they come with extra risk. You will likely set him off, if he wasn’t going before. You will almost surely increase your chances of being suckerpunched if your attention is on resources or you try to leave when you are too close. You can pre-empt here, and I showed a social pre-emption. No injury, but usually even more effective than trying to suckerpunch first.

But once it’s on, once a bad guy has made violent contact with you, de-escalating and gathering resources are off the table. Mostly. By all means yell for help as you defend yourself. But never instead of defending yourself.

“I don’t want to waste time learning power generation because I could never hurt a big man.”

Grrr. I’ve broken ribs on people much bigger than myself. Collapsed a trachea on someone who out-weighed me by over 100%. With an informal survey, we are now at, officially, 119 people who have either used a cup-hand slap to the ear, had it used on them, or seen it used. How many of those 119 incidents have seen the receiver keep fighting? Zero.

Small people can hurt big people. The smart way, of course, is to use a tool. It happens and it has happened. But if you are weak and small, your body mechanics must be superb. And there’s no rule that say big, strong guys can’t have better body mechanics than yours. There are no guarantees in this world.

But how fucked-up is it to say, “I can’t win so I won’t try.” Talk about a self-fulfilling prophecy.