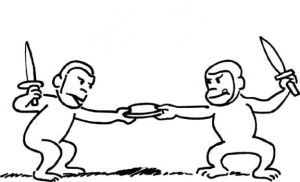 I do not understand the emphasis in training of ‘knife fighting systems.’ I always found sticking a knife into someone the easy part. (Give me five minutes and I can show you guaranteed ways to take someone out.)

When it comes to blades, the challenge is not getting stabbed or slashed — a result that is much, much harder to achieve without effective defensive training. Got it? Stabbing easy. Not getting stabbed, hard.

Yet the emphasis in commercial knife training is on offense. What’s really confusing to me is that the offense is overwhelmingly aimed at creating non-fatal injuries. (And spare me the ‘in the jungle wounds turn septic’ argument — especially in light of what I am about to say in the next paragraph.) The extended and ongoing nature of knife training is dependent on dealing with offense and carving people up. (In fact, it could be argued the nature of the training is that defense is a minor issue that must be addressed on your way to carving someone.

It is that attitude where we run into major problems. See first of all, a knife is a lethal force weapon. Putting this into plain English, in a civilian context the only time you are legally justified in using a knife on someone is when that person is trying to kill or maim you. I’m not going to diddlyfart around with ‘reasonably believes,’ keep it simple — someone is in the process of trying kill or cripple you or seconds away from starting (like pulling a weapon). Which in light of this, doesn’t it make sense to maybe… just maybe .. be a little concerned about incoming fire?

Second, there is no time for a long drawn out duel when someone is trying to whack you. You sort of need a Larry the Cable Guy attitude of “Git R’ Done!” What is inherently flawed about the weedwhacker of death approach (defense is for pussies) is while you’re doing it to him, he’s returning the favor. I know the cliche is ‘the best defense is a good offense’ but I cut him 32 times and he only cut me 25 — well it just doesn’t quite strike me as the kind of ‘victory’ I’m looking for.

Third, is let’s say for the sake of argument that you were under immediate threat of death of grievous bodily injury and you go weedwhacker of death on the dude. Now you have to explain to the jury why you carved the dude 32 times. Because hey you know what? They’ve seen that same thing in slasher flicks.They KNOW when you carve someone up that bad, it’s because you’re a complete psycho.

Fourth is what is going to hang you by the balls and cut them off. And unfortunately, if all you did was focus your training on physical offense, your pending castration will be a self-inflicted. That is how much time have you spent on threat assessment? Articulation is another matter entirely. How much time have you spent learning to recognize WHEN you are actually in immediate danger?

Or are you just assuming that you’ll know when it’s the right time to unleash your deadly training? Because here’s a critical thing to consider — under adrenaline, fear and freaking out because you THINK you are in danger — odds are good you’re going to over react.

In case you missed it, I just said, unless you have spent time learning — from reliable sources — what actual danger looks like, how it progresses, and practicing making use of force decisions — odds are you’re going to carve up someone when you don’t have to. And that is exactly how you will be treated by the cops and the prosecutors.

We can all make mistakes, but the fact is if you’ve been focusing your training only on the physical — and the offensive aspects of that to boot — odds are overwhelming that you won’t just screw the pooch, you’ll fuck the dog when it comes to using a lethal force instrument on someone.