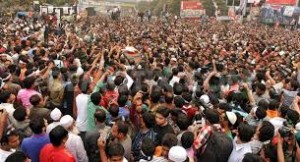 The problem I have with the whole militarization thing is people think riot gear is militarization. Straight up, riot gear has increased protestor safety and reduced injuries on both sides.

Yep, you heard me right. Read it again.

I’ve not only been in riots, but I have many years of experience with crowd control. One of the things that tickles me pink about living in this country is that not only do you have the right to peacefully assemble (even protest) but that the cops will protect you and work with you. Even better, the working compromise brought about by getting a permit allows you to assemble in a location, march along a route, other people to go about their business, people and property to be protected and the police to set up traffic control so everyone else can go about their business. I mean seriously, how cool is that?

Here’s the thing about crowds, they’re a thin red cunt hair from becoming a mob or a stampede. I’ve seen both happen. Hell, I’ve seen both happen at once. If you want to see a stampede, try being around a crowd when fire, an explosion or shooting happens. That’s all it takes. At the best of times, a crowd is like walking through a fuel depot while smoking — you can usually get away with it, but every now and then…

Still other crowds are riots waiting to happen. This isn’t just a fuel depot, there’s gas splashed over everything and people are flicking matches — if not juggling torches. A pretty reliable indicator to watch for is when protesters decide to go off the reservation. Starting with, not bothering to get a permit. They leave the assembly area or the route and take it elsewhere. Now this could be just a means to keep media attention on a long standing process (e.g., occupy people routinely left the protest area to get arrested to keep the lens on them) or it could be a mob on its way to a riot. To quote Firefly “I aim to misbehave.”

Now when confronted with this behavior riot gear is literally a life saver. I do mean that. Kent State shows us what coordinated military action against rioters results in. Conversely the beatings, firehosing and teargassing protestors of the 1968 Democratic Convention were arguably response to refusal to obey lawful orders and attacks on the police via projectiles. Just up the road in the Late ’90s the students of CU Boulder decided to riot ‘for their right to party’ aside from massive property damage, at least 12 officers were injured. (I think four of them had to go on permanent disability)
http://www.ndsn.org/mayjun97/boulder.html

Simply stated armour and shields protect officers so they do not need to respond to threats that if they were unarmoured* would be a danger. These days you REALLY have to work your ass off to provoke a response from the riot police.

*and yes, I’m spelling it that way on purpose. You ride around in armor (e.g. tanks, Bradley’s and armored humvees) You wear armour.