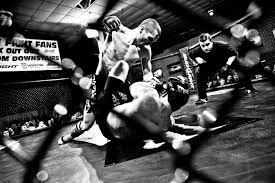 And another … about a well balanced MMA fighter who got his ass handed to him in a blitz attack.
***

In Rudyard Kipling’s “Jungle Book” the general rule of the jungle people is to avoid the monkeys. They’re too goofy and disrespectful for the jungle people. There’s a scene where Mogali ignores this and finds himself among the monkeys. There’s a speaker and everytime he pauses for a breath the monkeys dance around and shout “This is true! This is true! We all say so!” (Now this has been modified to “It is true because we say it is.”)

Here’s the problem, you can spend so much time being generalized that you end up not being good at anything.
Straight up, you don’t need to be a well balanced fighter. Does it help to have skills to cover a wide variety of circumstances? Of course. But focus more on what you’re likely to run into.

Let’s take grappling and ground fighting. Are you a MMAer? Is it your job to control people without injuring them? Are you going out and picking fights with MMAers? Do you have rowdy friends whom you have to sit on now and then? If the answer is yes, then you need it.

If the answer is no, then do you really need to be good at grappling? I’ll tell you what, BJJ is GREAT for handling people you don’t want to hurt and for when you’re in a safe environment. I mean that. It works straight out of the box — for those circumstances. No lie. If at a family reunion Drunken Uncle Albert is getting out of line and your mom says, “Take him outside,” I guarantee you it’s great for when he takes a swing at you. You can’t kick his ass because Aunt Betsy will get pissed, but you gotta control him.

But the Kool-Aid drinkers will tell you it’s great for street self-defense. Bullshit. I guarantee you the LAST place you want to be in a self-defense or street situation is on the ground. So, because it isn’t useful in those circumstances, don’t try to use it.

Having said that, you know what you can learn from either MMA. BJJ, traditional throwing arts or gymnastics? How to fall without getting injured. This, whether during physical conflict or just slipping on ice. So do you need to know how to fall? You betcha. But if you’re not going to stay on the ground, you’re better off investing your limited time to learning how to handle things that happen more.

The well rounded fighter myth comes directly from the sports world where ONLY two contestants step into a limited ring and can do a limited number of options. (Contrary to what fans tell you ‘no holds barred’ does NOT mean no rules — it just means there are no judo/jujitsu (sports holds) disallowed). There are many more options (and dangers) out in the streets.

I’ve seen way too many people — who have lots and lots of techniques — get their asses handed to them by someone who relies on only one strategy and does it with complete commitment. A big part of the reason this works is the well rounded fighter spent so much time and effort learning all these techniques to become a balanced fighter they failed to learn a very important lesson. Get the hell out of the way of an on coming train.
Legal considerations

The thing is, most MMA ground techniques are a fast track to prison if you try them out on the streets. The older submission hold BJJ stuff really is a lot safer and better for controlling people.

My job and lifestyle required … diversity. But far more important was knowing that I wasn’t going to beat someone at their own game. You got a boxer? Get him off his feet. You got a grappler? Don’t go to the ground. You got a shooter? Shoot back (you don’t actually win, but they tend to get hairless and quit when you shoot back). You got a knifer? You got problems.

But if you don’t live that kind of lifestyle. If you don’t have those kinds of jobs. If you aren’t the kind that trouble is attracted to you… you don’t need that level of skill and training. It’s macho fantasy.

The reality is much, much different.